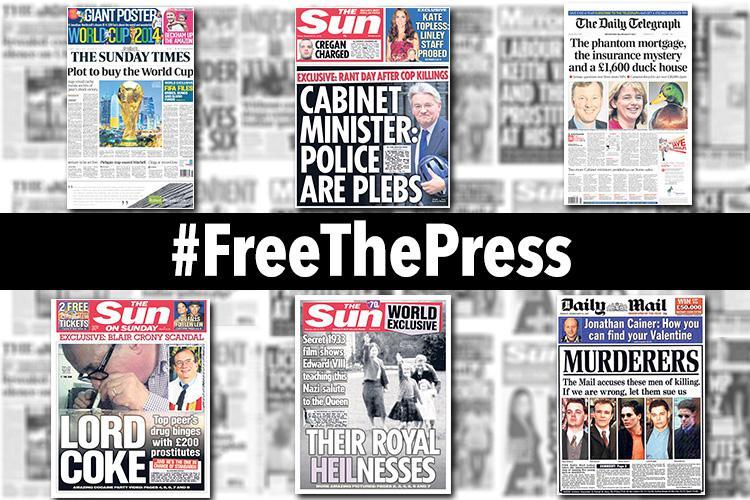 (This submission draws heavily on the draft response to the DCMS Inquiry at https://freethepress.co.uk/ which has been heavily promoted in the Sun and Spiked. You may notice some significant differences, however.)

Secretary of State for Culture Media and Sport,

My answers to your consultation questions are as follows:

Question 1: Which of the following statements do you agree with?

Section 40 would enhance freedom of the press and provide affordable access to justice in cases of libel and privacy in the United Kingdom. Far from putting an undue burden on publications, it will create a powerful incentive to join an independent regulator and to abide by established codes of conduct. Publications would have to shoulder legal costs of complainants whether or not they are found to be at fault only if they choose not to join a Leveson-compliant regulator and to deny complainants access to justice to begin with.

Any dire consequences for publications both large and small would, therefore, be the result of their determination to ignore the will of Parliament and not to join a recognised regulator. Independent publications should have no reason to be reticent about reporting important stories for fear of crippling legal costs and bankruptcy because vexatious claims made against them will be ruled out. Indeed, it ought to be easier for publications who are members of a recognised regulator to report on the activities of the rich and powerful because, unlike now, they will be protected from expensive libel actions.

If the press is to be free, the state should have no role in regulating what is published which is precisely why Section 40 is not the danger to press freedom its critics make it out to be. It is merely a means to incentivise publishers to sign up to a recognised regulator – hardly evidence of state coercion of the press.

Question 2: Do you have evidence in support of your view, particularly in terms of the impacts on the press industry and claimants?

* Repealing section 40 now would do nothing to protect the freedom of our press and the democracy it is meant to safeguard.

* With section 40 in place, complainants are no more likely than they are currently to launch legal cases against publications. This is partly because section 40 deals with serious legal claims and not with trivial and vexatious claims which will be thrown out. Furthermore, the majority of legal claims will be dealt with cheaply and quickly through a process of arbitration.

* There is absolutely no evidence that there will be either increased levels of legal action enabled by section 40 or drastic effects on the financial situations of small publications, forcing them to close. Titles are far better advised to attend to the needs of their readers and to invest in quality journalism if they want to survive rather than scaremongering about a piece of legislation that will actually serve the interests of their readers.

* Newspapers are supposed to be important public institutions though they do not always act in the public interest which is why there was such outrage when the phone hacking scandal first broke. Evidence of unethical and criminal behaviour that has emerged in the last five years has damaged their historic reputations and revealed patterns of ongoing political and social intimacy with political elites. The more transparency we have, the better (which is also why a Leveson 2 is so vital).

* It is true that John Whittingdale, the former culture secretary, has said that imposing the cost penalties outlined in section 40 would result in further losses of jobs and titles in the newspaper industry. This is the same John Whittingdale who did nothing while he was culture secretary do address job losses and newspaper closures and who, according to one Whitehall source, became “the culture secretary Rupert Murdoch dreamt of, and the cabinet insider those who fought Brian Leveson’s recommendations prayed they would get.”

Answer: The only people to argue that commencement of section 40 would amount to strong arming independent publishers into signing up for outside regulation by threatening them with financial ruin are those who want to continue operating a system in which ordinary people do not have effective redress against press attacks. The scale of the campaign led by the newspaper industry against section 40 suggests that they are 100% convinced that full commencement will indeed be an effective incentive to join a recognised regulator.

Question 4: Do you believe that the terms of reference of Part 2 of the Leveson Inquiry have already been covered by Part 1 and the criminal investigations?

Answer: Not at all. Far from putting the entire British press on trial for the wrongdoing of an undisclosed number of journalists and executives, we need Part 2 to address the issues that Part 1 was unable to address: the relationships between police and the press including questions of whether corrupt payments were made to the police and the impact of these relationships on police investigations.

* Such was the scale of outrage following the phone hacking scandal that 67 journalists were arrested from 2011-2015, more than any country in the Western world in that period. The investigations costing the taxpayer £43.7 million resulted in 8 convictions for phone hacking (Operation Weeting) and 2 convictions for paying public officials (Operation Elveden) though it is true that Operation Tuleta into computer hacking returned no convictions. However, a series of other crimes were not part of the remit of Leveson 1 – including burglary, blagging, email hacking and unauthorised access to confidential medical and criminal records – and, as such, the terms of reference of Part 2 have not been covered by the criminal investigations instigated up to this point. Indeed, broader issues concerning corporate governance that were raised in the earlier trials, have yet to be heard.

* In the wake of Leveson Part 1, the National Union of Journalists concluded that the Inquiry had revealed “the unhealthy relationship between politicians, the police and sections of the press. It has been a powerful argument for the need for greater transparency between the political elite and the leaders and acolytes of powerful media conglomerates.” Launching Part 2 of the Leveson Enquiry is a necessary next step to secure justice for those whose rights have been traduced by wrongdoing and shed light on an area of public life that, to this point, remains in the shadows.

Question 6: Which of the two options set out below best represents your views?

The Leveson Inquiry highlighted the damaged to the freedom of the press posed by unethical proprietors, bullying bosses and highly concentrated markets in Britain. Britain now has the least trusted press in the whole of Europe, far below that of Hungary, Macedonia, Greece and Serbia. It is worth noting that the European country with the most trusted press, Finland, has a statutory framework for independent press regulation, the 2004 Act on the Exercise of Freedom of Expression in the Mass Media, which provides, amongst other things, a right to reply and a right to correction. This does not seem to have killed off freedom of the press in Finland.

The Government should not have launched a consultation in the first place given that Parliament had already agreed to Section 40 and that the previous prime minister had promised to deliver part 2 of Leveson. If this is to be “a government that works for everyone and not just the privileged few”, as the Consultation document states, then we need urgently to resist the entirely self-serving and specious arguments of a press lobby that is trying to cover up its past misdeeds and to wriggle out of effective oversight. Far from undermining the freedom of the press, Section 40 and Leveson 2 are essential if we are to uncover the real patterns of collusion between police, press and politicians and to equip ordinary people with the ability to secure affordable access to justice.

You have until Tuesday 10 January to submit to the government’s consultation on Section 40 and Leveson 2. Make sure your voice is heard.