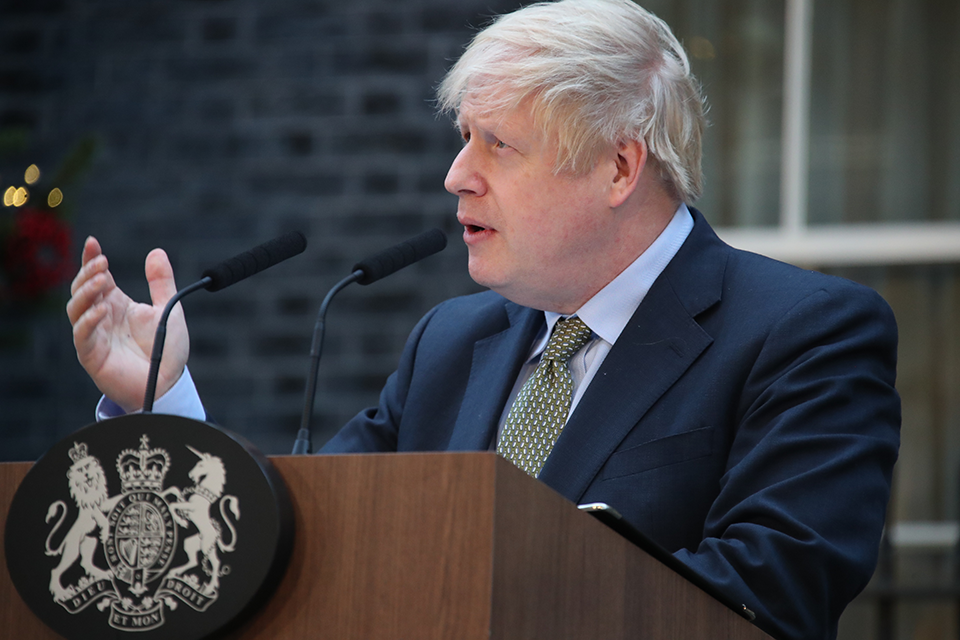 by Natalie Fenton, chair of the Media Reform Coalition

The mediation of messages plays a key part in the outcome of most elections and the United Kingdom’s December 12 general election was no exception.

Incumbent Prime Minister Boris Johnson‘s Conservative Party took the single strapline “Get Brexit Done” and repeated it endlessly. The slogan was plastered on billboards and emboldened on every pamphlet. It was also Johnson’s preferred response to most questions, even when it made very little sense in context. But after three and a half years of political wrangling over whether the referendum vote to leave the European Union would be implemented or not, with parliamentary processes stuck in an endless mire of withdrawal agreements and with news broadcasts seemingly talking of nothing else, it is no surprise that this slogan resonated strongly with the British public.

Pretty much everyone was sick of anything “Brexit” and the Conservative message enabled those frustrations to be vented. As a result, the Conservative Party secured a comfortable majority, while its main rival, Jeremy Corbyn’s Labour Party, which pledged to negotiate yet another withdrawal agreement with the EU and put it to a public vote, experienced its worst showing of seats since 1935.

Many of the additional seats won by the Conservatives came from what used to be called the “Red Wall” – a block of largely post-industrial areas in the Midlands and the North of England that have traditionally been Labour strongholds.

Many people in these areas voted to leave in 2016 and supported the party that promised, above all else, a swift exit from the EU in the 2019 general election, for several reasons.

These are also areas that have often faced long-term economic problems and where markers of deprivation are high. People in these areas suffered the sharp end of the global financial crash, with many of them losing all hope for secure employment. A government policy of debt reduction has left local authorities experiencing massive cuts, leading to greatly reduced social services. Moreover, welfare benefits were slashed, leaving the poorest and most vulnerable in these areas yet more impoverished.

The Brexit referendum brought to the fore the economic dislocation that has taken place since the 1980s revealing deep class as well as generational and ethnic divisions. Marginalised voices voted Leave to kick back against a post-war party system that has failed them and a professional political elite that has largely ignored them. And in this election, they just wanted the job done, so they voted for the party that promised to do just that.

Getting Brexit “done”, however, is unlikely to resolve the deep-rooted social and economic problems facing many of the people who voted for it.

Some predictions estimate that leaving the EU will further exacerbate place-based inequality across the country, causing England’s regions to grow 13-16 percent less than they would have done if the UK had remained in the EU. Moreover, some regions like Cornwall are forecast to lose up to an additional £60m ($78.5m) per year in EU funding.

This was clearly not a message that the Conservatives wanted broadcast, so their rebuttal tactics were  robust. Any attempt by the media to get the Conservative candidates to talk about the risks and realities of leaving the EU, or anything else that shows them in a bad light, was side-stepped – sometimes literally. The approach was straightforward – dodge the detail, just repeat the mantra, “Get Brexit Done”.

This resulted in a series of tactics of evasion and misinformation. The Conservatives tried their best to avoid difficult debates, with Johnson refusing to be interviewed by BBC’s Andrew Neil, a veteran journalist known for his combative interview style. The prime minister also vetoed several other programmes during the election campaign, including a climate debate on Channel 4, where he was replaced with an ice sculpture.

When a reporter used his phone to show Johnson a picture of a boy with pneumonia lying on the floor of a Leeds Hospital due to lack of beds, the prime minister took the phone and hid it in his pocket to avoid answering questions. And then there was the time the prime minister hid in a large fridge at a dairy in order to avoid giving an interview to ITV’s Piers Morgan.

The Conservative pledge to “Get Brexit Done” was grossly misleading. With the large majority that Johnson now has, his withdrawal agreement will no doubt be ratified in Parliament. However, there will still be very many years of negotiations on multiple trade deals before Brexit is finally “done”.

Misleading statements did not stop there, either. An investigation by First Draft, a nonprofit focusing on truth and trust in the digital age, found that 88 percent of Conservative campaign ads on Facebook were deemed by Full Fact, the UK’s leading fact-checking organisation, to be misleading.

In an age of social media, honesty is not straightforward. Earlier this year Facebook confirmed that posts from political organisations and political adverts are exempt from fact-checking. The move to targeted messaging, and the inability for all citizens to see and adjudicate between information in a targeted online campaigning environment, raises critical questions about equality of information, open debate and transparency.

The Conservatives played on this and focused on messages that would be crowd-pleasing, circulate rapidly and feed off emotional responses rather than accuracy. During a TV debate between Corbyn and Johnson in November, they even rebranded one of their official party Twitter accounts to make it look like a fact-checking service.

Labour tried desperately to broaden the agenda so that the election would be about more than just Brexit, attempting to focus on public services and the environment. Many of their plans were popular –  renationalisation of railways, water companies and the Royal Mail gained large support and a promise to increase public spending, particularly on the NHS and education, resonated strongly on the doorstep.

They put forward an ambitious manifesto with multiple new initiatives that promised widespread transformation. Different aspects of it were highlighted at regular intervals – free universal broadband one day, and a million climate jobs in every region of the UK, the next.

All this should have been seen as a gift by those seeking a better life after years of austerity. But as the days passed, rather than becoming more enthusiastic about Labour’s pledges, people started to query their economic viability. Years of rationalising austerity politics have clearly left their mark.

And although the Labour Party had settled on a Brexit strategy in support of holding a second Brexit referendum once the detail of a new deal was agreed, with “Remain” also on the ballot paper, it did not satisfy Leave voters and did not excite remainers.

Labour’s vote fell on average by more than 10 points in the most pro-Leave areas. Labour also had to battle the majority of the mainstream press which continuously pushed out anti-Corbyn and anti-Labour reports, analyses and opinion pieces.

Research by Loughborough University showed that the election coverage of the Labour Party by most national British newspapers was overwhelmingly negative. This was no surprise when just three companies – News UK, DMG and Reach – dominate 83 percent of the national newspaper market and hold the power to set the mood and the agenda for much of the mainstream media.

Traditionally, the British public relies on the broadcast media, which is subject to impartiality requirements, to make sense of the raucously biased reports they see in newspapers during election periods. This election, however, the adequacy of impartiality rules was also challenged.

Broadcasters were fastidious in ensuring that each of the main parties had the same amount of airtime. But counting minutes aired did not necessarily translate into fairness in content. News agendas were dominated by Brexit, the economy and taxation (all preferred issues for the Conservatives), with those that put Labour on the front foot such as health care and the environment distinctly lagging behind.

The BBC also suffered a series of gaffes that seriously dented its credibility. It was twice forced to apologise for misleading editing that showed Johnson in a good light; its leading journalists repeated Conservative Party spin on Twitter; and its programming highlighted allegations of anti-Semitism against Corbyn over those of Islamophobia in the Conservative Party. Amplification of the Conservative agenda was the news of the day.

Explaining election outcomes is never simple. While the media undoubtedly plays an important role, many other factors also influence the results. Nevertheless, if UK media organisations and journalists are guilty of even the slightest distortion of democracy, then we should be very worried.

In a complex and confusing digital age, the time has surely come for new regulations to ensure all elections are free and fair, and all forms of power, including the media, are held to account.

This was first published by Al Jazeera and is reproduced with permission of the author.