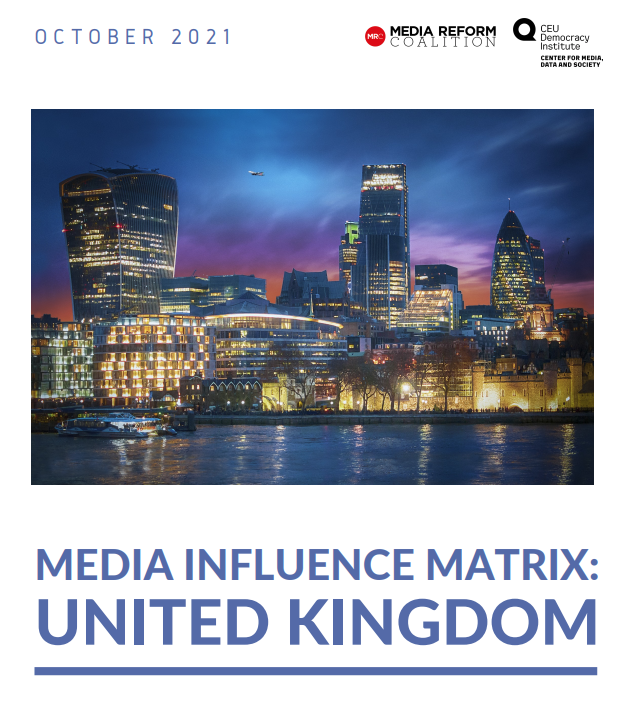 Global tech giants and British media players are fighting tooth and nail to access market resources. The result of this struggle will make or break journalism in the UK. This is the conclusion of ‘Technology, public sphere and journalism’ – the final chapter of the UK Media Influence Matrix report written by Leo Watkins.

Technology companies have witnessed in the last year several actions aimed at reigning them in. A newly introduced global corporate tax would impact their bottom line while generating billions in tax revenue; increased oversight of social media companies by national media regulators would see some of them radically changing the way they distribute and monetize content; anti-monopoly initiatives would reduce their size and power; deals that force them to share some of their revenue with publishers would make some pay for the news they share on their platforms.

As elsewhere, these events and trends are expected to fundamentally change, once again, the British media and journalism.

Who Are the Biggest Players?

The country’s broadcasters, especially the BBC, are the only ones that, thanks to their on-demand platforms, challenge to some extent this near-monopoly. But even there, American free-of-charge and paid video streaming platforms like YouTube, Netflix, Amazon Prime Video, and Disney+ are increasingly dominating the market.

What Issues Will Impact Journalism in the Near Future?

Tax evasion and anti-monopoly laws, as well as online harms regulation are two issues that are expected to define how tech companies will be allowed to operate on the British market. These regulations are likely to also shape the operations of the social media companies and impact their business models.

The dominant position of the tech companies didn’t necessarily translate into larger financial contributions to the British economy. The small amounts of tax paid by major tech companies who generate billions of pounds of revenue in the UK each year have often been the focus of media attention, public anger, and political inquiry. The impact of what is effectively tax evasion on the traditional news media is immense. Reduced resources for journalism and unfair competition create huge inequalities between news publishers and platforms.

The UK’s news publishers have strongly advocated for the development of a new pro-competition regime for digital markets that are currently growing in the UK. One effect of that regime is likely to be a series of regulations of the terms between the UK’s news publishers and the big tech platforms, particularly Google and Facebook. But it is unlikely that the planned regulatory norms will alone lead to significant incremental revenue for the publishers, which are therefore making other efforts to get better terms from the platforms.

The online safety bill, aiming to regulate legal but harmful content, will place content distributors under the supervision of Ofcom, the UK’s media regulator. Questions about how this will impact freedom of speech have been raised by voices who contest the role of the state in regulating speech.

Technology changed the way we practice journalism and consume news. From infrastructure development to market dynamics and content regulation, the future of the news will play out with these new initiatives. The last chapter of the UK Media Influence Matrix offers a comprehensive overview of the sector and lays down the most important changes that will shape the future of journalism in the country.

The full document is HERE.