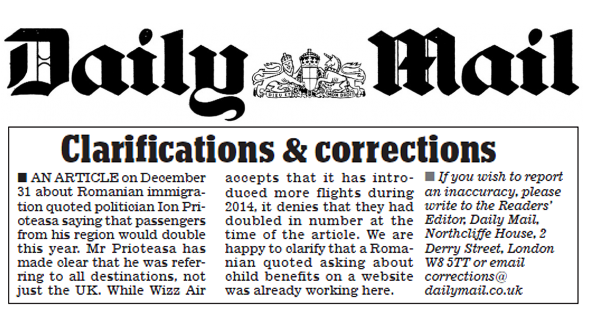 The Press Complaints Commission has ruled that the Daily Mail breached The Editors’ Code on accuracy with its story about buses and planes from Romania and Bulgaria to the UK being full-up and sold-out.

But following my 13 complaints against that Daily Mail feature story, the Press Complaints Commission has now ruled that, “the newspaper had failed to take care not to publish inaccurate or misleading information.” This, stated the PCC, was in breach of Clause 1 of their Editors’ Code of Practice regarding accuracy.

The ruling is one of the last to be made by the PCC as it is closing down this week to make way for its new press regulation service called IPSO, opening on Monday.

How the Daily Mail ran the story on New Year’s Eve. But it wasn’t true. Buses and planes were not sold out.

Last January over 80 people, including myself, complained to the Press Complaints Commission about the Daily Mail story. I published a series of articles on how the Daily Mail article article was full of serious inaccuracies and misleading statements.

My blog for British Influence called, ’13 reasons why I’m taking the Daily Mail to the Press Complaints Commission’attracted over 80,000 unique readers in a week.

But at that time, the PCC decided that no ruling was necessary as the Daily Mail had published a ‘clarification’(tucked away on an inside page). I wasn’t satisfied and insisted that the PCC investigate all the full details of my 13 complaints, compiled with the help of Alina Matis, foreign affairs editor of Gandul, one of Romania’s leading daily newspapers. Eventually, the PCC agreed.

During the past seven months, the PCC has acted as go-between with statements and counter statements going back and forth between the Daily Mail’s Group Managing Editor, Alex Bannister, and myself. The investigation could only go ahead, demanded the PCC, if there was no public comment from me during the process. It’s taken all this time for the PCC to reach its decision.

In response to my complaints the PCC ruled that:

• The Daily Mail could not support its claim that Wizz Air had doubled its flights from Romania to the UK to meet “increased demand” when working restrictions in the UK were lifted in the New Year for Romanians and Bulgarians. This, decided the PCC, raised a breach of Clause 1 (i) of the Editors’ Code of Practice.

• The Daily Mail had misquoted the Mayor of Romania’s Dolj County, Ion Prioteasa, as saying that the numbers of passengers flying from there to the UK, “will double to 70,000 next year”. In fact, Mr Prioteasa had been talking about the total number of air passengers flying to all the airport’s destinations across Europe, and not just the UK. This, concluded the PCC, raised a breach of Clause 1 (i) of the Code.

• The Daily Mail “created a misleading impression” when it reported that a Romanian woman posted on a website forum that she wanted to know what benefits she was entitled to if she had a baby in the UK. The Daily Mail article gave the impression that the woman was in Romania and wanted to come to the UK to have a baby and claim benefits. However, as I discovered, the Romanian woman had already been living and working in the UK as an NHS nurse for over two years.

Stated the PCC, “The article reported on Bulgarians and Romanians coming to the UK in the context of the removal of working restrictions in the New Year; it was clearly pertinent that the woman making the comment had been working here already for two years. The failure to make this clear raised a breach of Clause 1 (i) of the Code.”

As a result of complaints, the Daily Mail had already published two ‘clarifications’ earlier this year to retract their inaccurate report that during the New Year all cheap flights from Romania and Bulgaria to the UK had sold-out and buses were full-up.

As a result of the PCC’s rulings on my further complaints, the PCC now required the Daily Mail to publish a new clarification ‘promptly and with due prominence’. This appeared in today’s printed and online edition of the Daily Mail:

“An earlier version of this article quoted politician Ion Prioteasa saying that passengers from his region would double this year. Mr Prioteasa has made clear that he was referring to all destinations, not just the UK. While Wizz Air accepts that it has introduced more flights during 2014, it denies that they had doubled in number at the time of the article. We are happy to clarify that a Romanian quoted about child benefits on a website was already working here.”

However, in an apparent contravention of the PCC’s requirement, the Daily Mail’s ‘clarifications’ appeared in tiny print today under the original online article and in an obscure position on page two of the printed newspaper.

I had previously rejected the Daily Mail’s clarifications as being inadequate and not clear or robust enough. My argument was that the Daily Mail’s entire story contained so many inaccuracies that it should never have been published in the first place. Also, the Daily Mail’s corrections, in my view, should be as prominent as the original article, which had been a leading feature story. Today’s Daily Mail printed ‘correction’: but it was hardly displayed with ‘due prominence’ as required by The Press Complaints Commission.

The PCC did not agree with me, however, that the entire article was inaccurate or misleading. For example:

• The Daily Mail story claimed that one-way tickets from Bucharest to London were selling for up to £3,000 each. The Daily Mail’s inference was that flights were so full-up that only expensive tickets were now available, which wasn’t correct. I argued that expensive flights taking obscure indirect routes were always on sale, but completely irrelevant because cheap tickets costing less than £160 were readily available. The PCC, however, concluded that the reference to the £3,000 flight was not misleading. “The article clearly stated that this was the maximum price for a one-way ticket, and made clear that tickets for substantially less were available.”

•The Daily Mail story claimed on New Year’s Eve that Romanians and Bulgarians were preparing to travel to Britain “as a result of the lifting of working restrictions.” I asserted this wasn’t correct, but the Daily Mail claimed their report hadn’t specifically stated that they were travelling “because” the restrictions were being lifted. The PCC stated in its ruling, “The Commission, while acknowledging the statement arguably drew an association between those traveling to the UK and the lifting of work restrictions, noted that the statement did not make an express causal link between those travelling from Romania and Bulgaria and the reason for travel.”

In a follow-up complaint to the PCC, I asserted that the Daily Mail’s inaccurate article had caused “unjustified alarm and indignation” among its readers and had promoted xenophobia. I argued that the Daily Mail’s “unfounded inaccurate stories against Romanians and Bulgarians generally could cause unrest in our society, unfair discrimination and dislike of Romanians and Bulgarians, and are not in the public interest”. But the Press Complaints Commission responded that their code on discrimination only allows for complaints against an individual, not against an entire race or nationality.  This I felt was an unjustified and ridiculous limitation to their code covering discrimination.

The Chairman of Editors’ Code of Practice Committee is, of course, Paul Dacre, Editor of the Daily Mail.

• The PCC’s full ruling can be read here. My in-depth report and analysis of the Press Complaints Commission’s ruling and response to my complaints will appear on my blog here later in the week.

Reproduced with kind permission of the author