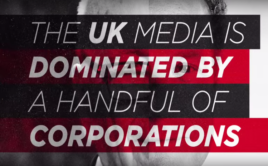 A new article by the chair of the Media Reform Coalition, Professor Natalie Fenton, for the Culture Matters blog, argues that coronavirus has exposed the need for a radically different structural orientation in our media. Coverage of the pandemic has revealed mainstream media to be an explicit channel for government PR spin, further propelling the revolving door between … END_OF_DOCUMENT_TOKEN_TO_BE_REPLACED

Transcript of John Pilger's statement, Today programme, BBC Radio 4, 2 January 2014. A recent poll asked people in Britain how many Iraqis had been killed as a result of the invasion of Iraq in 2003. The answers they gave were shocking. A majority said that fewer than 10,000 had been killed. Scientific studies report that up to a million Iraqi men, women and children died in … END_OF_DOCUMENT_TOKEN_TO_BE_REPLACED