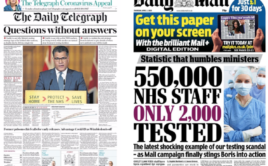 by Elizabeth Mizon, @elizmizon MRC supporters may have noticed some robust headlines around Covid-19 in news titles more commonly associated with supporting the government. Elizabeth Mizon reflects on the motivations for a potential shift in approach but warns against thinking that this signals a fundamental transformation of their priorities. ‘The FT View’, The … END_OF_DOCUMENT_TOKEN_TO_BE_REPLACED

The Media Reform Coalition has published a new report on media ownership and plurality laws from across the world - in the belief that Britain has something to learn from them. The report, titled ‘The Elephant Next Door: a survey of international media ownership regulations’, summarises the broad international support that exists for plurality laws, and then examines … END_OF_DOCUMENT_TOKEN_TO_BE_REPLACED