Most local newspapers in the UK are owned by a small handful of companies – and this concentration has just got worse. On March 18, Newsquest announced it was buying out Archant, and will be taking over its 74 local news titles. In light of these developments, MRC have updated the ownership figures from our 2021 report 'Who owns the UK media?' Headline findings are: … END_OF_DOCUMENT_TOKEN_TO_BE_REPLACED 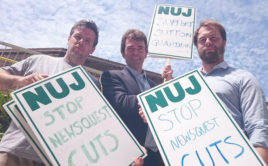 Originally posted on the NUJ Members of the London Assembly have pledged to support Newsquest journalists in the capital. A delegation of striking Newsquest journalists, led by Michelle Stanistreet, NUJ general secretary, met Assembly members representing the Conservatives, Labour, Liberal Democrats and Green Party. They were told cuts to staff meant that many London … END_OF_DOCUMENT_TOKEN_TO_BE_REPLACED