After more than 12 weeks deliberation, Ofcom have this week announced that they will not be investigating the BBC's controversial Panorama edition on antisemitism in the Labour Party. Broadcast five months ahead of last December's general election, the programme was the third Panorama edition in four years focused on, and wholly critical of Jeremy Corbyn's leadership of … END_OF_DOCUMENT_TOKEN_TO_BE_REPLACED 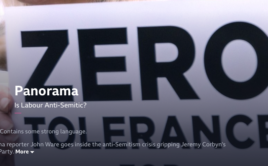 The BBC transmitted an edition of Panorama on 10 July called ‘Is Labour Anti-Semitic?’, presented by John Ware. It contained allegations that senior Labour figures close to Jeremy Corbyn had interfered with the internal investigations process and that the Party was insufficiently committed to tackling anti-semitism within its own ranks. In response, the Labour … END_OF_DOCUMENT_TOKEN_TO_BE_REPLACED