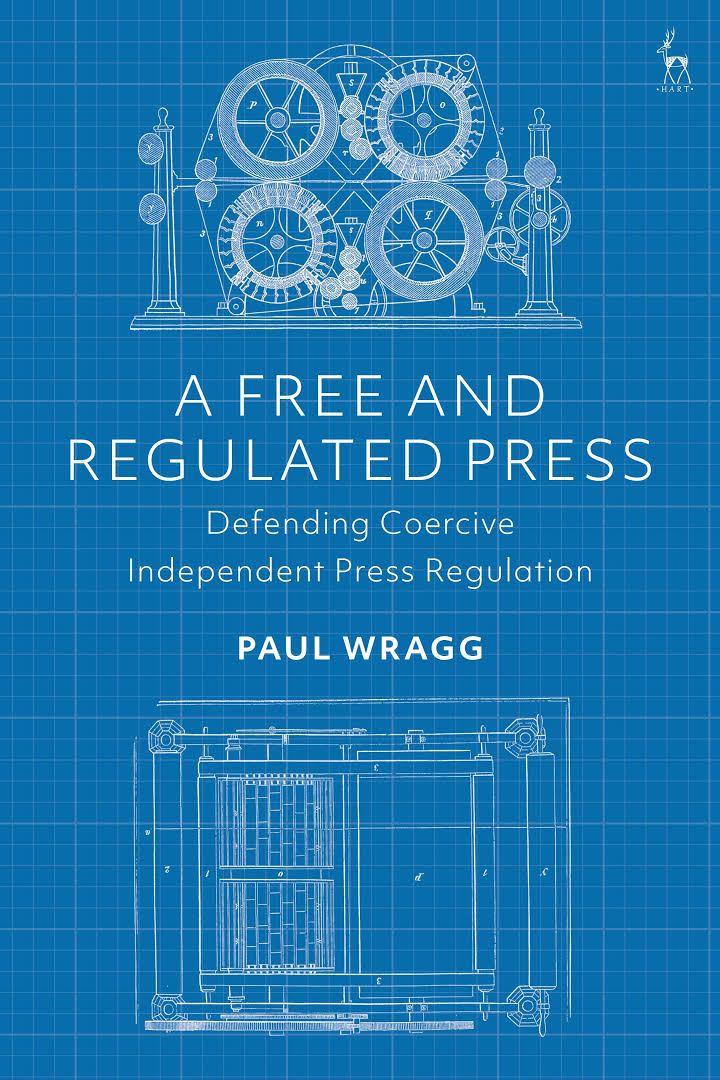 by Paul Wragg, School of Law, University of Leeds and co-host of @medialawpodcast

In a newly published book, A Free and Regulated Press, I ask: why are newspapers not regulated on a compulsory basis, as broadcasters are?

There are several pragmatic reasons, of course, but what, if any, are the principled reasons?

Back in 2011/12, Lord Justice Leveson, summarising what he had been told, assumed it was because the press is special. Unlike individuals, who can express themselves however they please (within reason), the press has a purpose to fulfil and compulsory press regulation – especially employing disciplinary measures like fines – would seriously compromise that function and so jeopardise, in turn, informed democratic participation. With this portentous warning ringing in his ears, Leveson timidly shied away. David Cameron, then Prime Minister, tapped into this taboo when he dismissed the possibility of using statute, to set the regulatory framework, as a ‘Rubicon’ he was unwilling to cross.

Looking back, Leveson was too quick, I think, to accept the idea – of compulsory press regulation’s supposed incompatibility with press freedom – as incontrovertible. He never once stopped to ask why this must be so. Likewise, Parliament was too timorous in agreeing that anything but voluntary, self-regulation would decimate press freedom. Whereas, intuitively, the primary claim – that press freedom is too important to interfere with – seems reasonable and compelling enough, the rationale is, I say, only intuitively persuasive. Certainly, there is a tradition that says the press has a purpose and this tradition informs law as well as politics and culture. Yet just because we treat it so does not mean it must be so.

The object of my book, then, is to subject this purposive claim – the press as special or as a constitutional-component – to rigorous investigation. The outcome of that inquiry leads me to a simple conclusion: the press is not special. The press has no duty to serve the public. It has no responsibility to enable democratic participation. In fact, there is nothing that the press must do or can be made to do. Indeed, I say there is no qualitative difference between the speech rights of individuals or the press, either as a matter of theory or positive law: that is, the law intervenes, and should intervene, only when certain types of speech – what we might call ‘public interest’ or ‘important’ speech is threatened. This places important limits upon what a regulator could do.

From that conclusion I ask why compulsory press regulation should be thought automatically incompatible with press freedom? I offer a range of arguments to say that it isn’t. Here is one to consider: the press, itself, has drawn up a code of conduct that, if properly administered, would adequately protect the rights of victims, both in terms of published content and during the newsgathering process. This code, as we know, is used by IPSO. I repeat that this code is the product of press initiatives. How, then, can it be said to be incompatible with press freedom? The press certainly can’t speak of incompatibility: they wrote it! The two are compatible because the code mirrors – and to the extent it mirrors – legal rights, both those arising in practice and theory (and those rights are compatible with press freedom).

Does that, though, render regulation redundant? If the purpose of regulation is merely to safeguard legal rights, then surely the market is the only proper mechanism for tackling serious press malfeasance? Any unfair deprivation of victims’ rights can be remedied through the courts. In that way, the wrong is compensated and the economic activities of newspapers continue. I disagree – not least because the claim presupposes an equality of arms not only between claimant and defendant but also within the pool of all potential claimants, as if all victims are sufficiently financially endowed and psychologically resilient to pursue any and all rights-invasions publicly and individually, through the courts. It is simply a myth that press victims are so equipped. There are many – too many – previously unknown members of the public that find themselves, unwittingly, the plaything of a vindictive press. It is this group that needs compulsory regulation.

The market is also flawed due to the nature of litigation. Litigation is an insular affair. Since claimants pursue claims alone, they are susceptible to pressures that a collective may resist, including the pressure to settle. Even if the pool of all claimants knows the real extent of press malfeasance (which they don’t), the wider public certainly doesn’t. Imagine an industry where rights-violations were not only regular but routine. The press has the power, should it wish to, to expose it. Rarely, if ever, does it hold itself accountable. This is another reason why compulsory press regulation is so important: the public interest in knowing the full extent of these rights-violations.

The political moment for meaningful press reform might have gone with the death of Leveson 2, but the problem remains, and is in urgent need of serious public scrutiny. IPSO, we know, has powers to fine press malfeasance but has never used them and, I suspect, never will. Meanwhile, the press industry has reverted to its ritualistic torments of innocent people; these victims of unwarranted, unwanted press attention are gathering.

A Free and Regulated Press – the preamble to which is freely available – is not a polemic, though I have presented it here in somewhat polemical terms. It is a rigorous examination of several under-theorised problems: what is press freedom, what is press regulation, and how do the two correlate? Its aim is simple: to show that, in fact, as a theoretical proposition and practical outcome, we can design a system that will hold the press accountable for the wrongs it perpetrates on all its victims.

Paul can be contacted at P.M.Wragg@leeds.ac.uk. A Free and Regulated Press: Defending Coercive Independent Press Regulation has just been published as a Bloomsbury e-book.