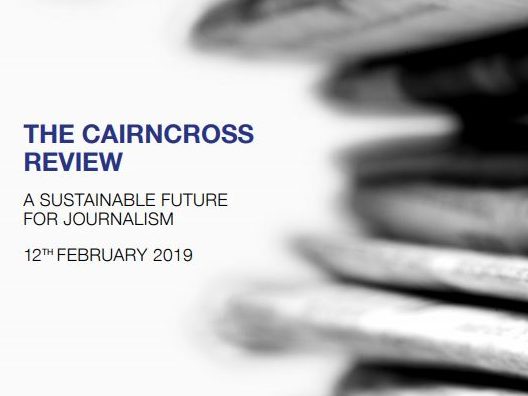 The Cairncross Review, which is published today, finds that: “Support for public-interest news providers is particularly urgent and justified. In the immediate future, government should look to plug the local gap to ensure the continued supply of local democracy reporting.”

It goes on: “Given the evidence of a market failure in the supply of public-interest news, public intervention may be the only remedy”.

The Media Reform Coalition welcomes this conclusion because it makes clear that the problems facing journalism do not lie in the failure to compete with some mythical online alternative.  It really doesn’t matter whether news is legacy or online native as the problem is the same. Advertisers have abandoned news for targeted advertising organised by the major platforms: Google, Facebook and Amazon.

Dame Frances Cairncross, an economist and former journalist, found that even the widespread production of “click bait” to increase the number of readers has not increased advertising funding enough to allow news organisations to pay staff. It has merely debased the product.

The problem, she recognises, is most serious at the local level where newspapers, which used to attract the bulk of local advertising, now struggle to pay journalists. The creeping loss of local journalism means that local government is increasingly free of scrutiny.

Some of her solutions are rather vague:  recommendations for codes of conduct between internet platforms and news providers and a News Quality Obligation on the platformsto be monitored by a new regulator. Given that she steadfastly declines to provide any definition of news quality, it is quite hard to see what this actually means

The key proposals are:

An Institute for Public Interest News: an independent body which would administer and distribute funds to local news providers.  This is similar to suggestions made by the Media Reform Coalitionin our evidence to Cairncross. It would build on the work already being done by the BBC to fund news reporters working directly with local newspapers but it would be paid for by Government, hopefully with some more kicked in by the platforms. MRC would welcome this as long as the money is not simply passed on to over-leveraged news organisations that have already failed to deliver. Organisations receiving public funds should have clearly established public obligations in the coverage of local democracy and cooperative or public interest companies should be the first to receive such funds.

An Innovation Fund organised by NESTA: innovation in the news sector tends to mean using data in ways which cut down costs for news organisations. Since the major cost of any news organisation is the employment of journalists, this kind of innovation needs to be treated with some caution. The intention is to fold the fund into the Institute for Public Interest News once it is established. Hopefully this would mean that there is the same oversight of both sets of money.

Tax changes of various kinds are suggested to provide a measure of additional subsidy to the larger news organisations. Such changes are welcome and might encourage small start-ups.  There is also a proposed change in charity law so that news organisations might be able to register as charities and attract charitable funding. This is seen as a tricky issue but if news organisations taking public money were required to maintain public service obligations, it shouldn’t be as problematic as she suggests.

A Review of Online Advertising: this is well overdue. The rise of programmatic advertising has been swift and opaque. It is plagued with mis-selling scandals and dependent on the misuse of personal data for targeting.  Unfortunately one of the major recommendations is that publishers should become more adept at collecting and using this data themselves and that platforms should be compelled to share data on readers’ behaviour. There is already a growing public resistance to the use of private data for attracting advertising. It would have been far more useful to demand that private data should no longer be used for the targeting of advertising at all, by anyone.

One change that Cairncross does not suggest is that platforms should have the same duties of care to audiences as news publishers. She rightly decided against this because any obligation on the platforms to pre-vet content would mean that the internet ceased to be a medium of instantaneous connection.

The suggestion that is really not needed is yet another Ofcom Investigation of the BBC. This was almost certainly a sop to the larger local newspaper publishers who constantly complain that the BBC, by providing an online news service, undermines their provision of  commercial news. Any suggestion that the BBC should be forced to curtail its activities while commercial services are subsidised should be resisted.

In conclusion, Cairncross highlights some significant problems and proposes some useful initiatives that might sway journalism back towards the public interest. However if history teaches us anything, it is that powerful news organisations – despite falling print circulations – will lobby very hard to dilute any obligations placed on them and argue very hard that they should be the recipients of any additional revenue. Cairncross provides some salutary warnings about the future of news but her proposals are likely to be insufficient to sustain a public interest news media in the face of digital giants and legacy media moguls.