Who would have expected that one of the central debates about the future of the BBC would not be about its pro-business news coverage, its financial mismanagement or its alleged cover-up of the Jimmy Savile scandal but about whether it should show Strictly on a Saturday night?

This week’s Green Paper on BBC Charter Review signals the latest stage of a scuffle between the government and the Corporation (and perhaps even between the government and BBC audiences) about how big, independent and accountable the Corporation should be in the forthcoming period. Dressed up as a sober debate about the purposes, scale and scope of the BBC, the Green Paper consists of a series of proposals that, while drafted in Whitehall, could easily have been conceived in Dacre Towers, the home of the Daily Mail. It is effectively payback for the support given to the Tories by press barons during the recent general election.

Culture secretary John Whittingdale insists that he is ‘committed both to the future of the BBC and to its underlying Reithian mission’ (p3) except that in the very next paragraph he goes on to question the relevance in a digital age of the principle of ‘universality’, one of the foundational principles of Reithian public service broadcasting. Instead of encouraging the BBC to reach out across all platforms and to serve all audiences, the starting point of the Green Paper is that the BBC’s very success is now its problem.

Indeed, scale, not independence, accuracy or quality, becomes the key issue. The BBC, it suggests, should focus not on popularity but marginality – on ‘underserved audiences’ (p3), ie those affected by that wonderfully neutral phrase: ‘market failure’? In other words, the BBC should relate only to audiences and genres that commercial broadcasters deem to be unprofitable and so leave the latter to gobble up large audiences while leaving the crumbs to the Corporation.

It goes out of its way to suggest that the BBC is the dominant player in all the ‘markets’ in which it operates, without acknowledging firstly that it is, at least hypothetically, subject to public scrutiny and secondly that it is not, in fact, the UK’s largest broadcaster. So, for example, it shows this graph: 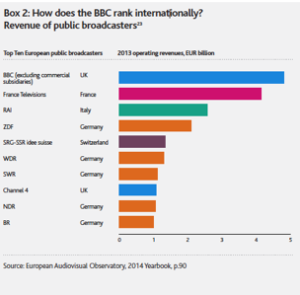 But it chooses not to show this graph that shows BBC ‘dominance’ in a rather different light: 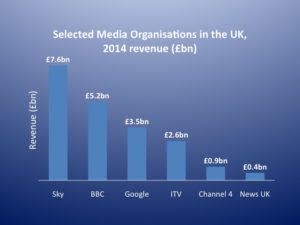 The Green Paper claims to support the BBC’s current mission but also states that ‘changes to the purposes, scale and scope may be required to ensure that this does not result in an overly extended BBC’ (p16). For this reason, it is obsessed by the BBC’s ‘impact on the market’ (p28) and manages to list more negative than positive consequences arising from the fact that the BBC reaches some 96% of the UK population each week. So it grudgingly acknowledges that the BBC’s size and spend ‘can result in positive effects for the creative industries’ (p25), a phrase that rather downplays the Corporation’s contribution to the wider creative economy, an amount reckoned by the BBC itself to be some £8 billion. But the Green Paper then counters this with five ways in which the Corporation may eat into the activities of its commercial rivals. So when it argues that ‘the scale of BBC’s online offer is impeding the ability of other UK news outlets to develop profitable business models’ (p25), it ignores the fact that the BBC was encouraged in the late 1990s to innovate and to build digital platforms at a time when the vast majority of the press had no inclination to take the risk of investing in online services.

But there is a more profound question. Why should we measure the BBC simply in terms of its wider impact on the marketplace? Do we judge the NHS on the basis of whether it makes life difficult for Bupa or do we welcome its status as an institution that treats everyone irrespective of background or income? Do we want to curb spending on schools in case this hits the pockets of the independent sector and ‘crowds out’ commercial competition?

This is an austerity-led consultation, obsessed (much the like BBC itself) by the pursuit of ‘efficiency’ and ‘value for money’. This applies even to those services where it would be hard to apply standard economic arguments such as the provision of different language services within the UK. So, for example, it notes that the cost of S4C in Wales and BBC Alba in Scotland is ‘considerably higher than cost per hour for English speaking content’ (p30). This is hardly breaking news – how could it be otherwise in serving more dispersed communities? – and totally misses out the whole point of public service broadcasting which is about reaching out to minority audiences despite the cost. This was the logic used by the BBC Trust in its ultimately unsuccessful attempt to shut down Asian Network. By noting that these services are expensive to run because there are relatively few Gaelic and Welsh speakers, it also contradicts its own stated aims: to shift the BBC away from popular programming and to focus on content not provided by the market.

There is a restricted discussion of funding mechanisms with only three options identified: a reformed licence fee (to allow for digital consumption), a household payment (as in Germany) but possibly at a lower level, and a combination of public funding and subscription. Funding the BBC from general taxation is dismissed on the basis that it would ‘risk lessening the BBC’s independence from Government’ (p50). Given that the last two licence fee deals took place behind closed doors over a single weekend and that the most recent deal forced the BBC to part fund the government’s welfare cuts, this is far from a convincing argument. It also fails to explain why a fixed proportion of public spending, protected by legislation from government or party political interference, could not be dedicated to a new public service content fee that, because it would come out of general taxation, would at least be more progressive than the current system.

The Green Paper does raise some important questions on underlying values and performance. For example, it is absolutely right to refer to the fact that the BBC has a poor record in both hiring and representing ethnic minorities. But how on earth will a smaller, narrower and more ghettoised BBC relate better to groups that it has previously marginalised? Does the Culture Secretary imagine that a ‘market failure’ broadcaster will suddenly offer more prospects to under-represented groups as opposed to seeking those groups who, at least in the long-term, may yield valuable subscription revenue?

The BBC needs radical surgery but this skewed and hugely partisan consultation will do nothing either to democratise the BBC or to secure a more pluralistic and diverse media landscape. We urgently need new voices to counter the dominant, monotone voices we hear throughout both online and offline spaces. We urgently need to find ways of providing funding to hyperlocals, community broadcasters and investigative journalists who are assuming public service roles that are increasingly being shed by commercial operators. We urgently need media outlets that are truly independent of vested interests and bold enough to challenge ‘common sense’ arguments on, for example, immigration and austerity. We urgently media outlets that look and sound like the audiences to whom they are supposed to be accountable. An ideological campaign fought on behalf of the BBC’s commercial rivals really isn’t the way to go about this.

This is a longer version of an article originally written for The Conversation.