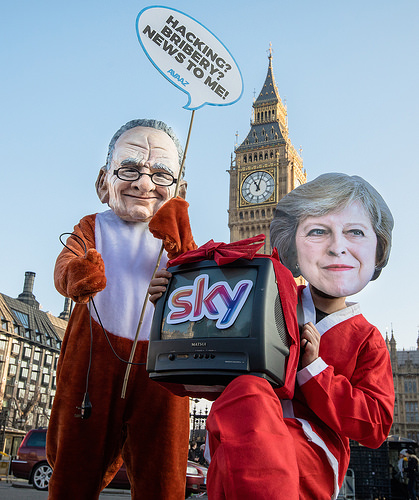 MRC’s submission to Ofcom as part of the latter’s investigation into the proposed acquisition of Sky by 21st Century Fox presents new evidence about Sky’s influence on the UK media environment together with worrying levels of concentration in the wholesale news market.

The submission further underlines Sky’s uniquely wide penetration across television, radio and online news sectors, as well as intermediary platforms. Given the leadership role played by both Rupert and James Murdoch within 21CF coupled with the Murdoch Family Trust’s significant shareholding, the proposed merger seems highly likely to result in an unprecedented accumulation of wholesale news control. This matters irrespective of concerns regarding the potential impact of the merger on Sky’s editorial output. Ensuring a plurality of independent news sources – especially at the wholesale level – is fundamental to democratic values in and of itself.

We believe that the proposed transaction will remove any remaining doubts about de facto control in respect of Sky by Murdoch and will significantly diminish structural checks and balances on influence wielded by the Murdochs.

We call on Ofcom to give serious consideration to the limitations of its metrics when assessing online plurality at the wholesale level in relation to the 21CF bid. Together with many other concerns about the corporate behaviour of Fox and the extent to which the Murdochs can be considered ‘fit and proper’ owners, we firmly believe that the proposed acquisition would be bad for our media and bad for democracy.