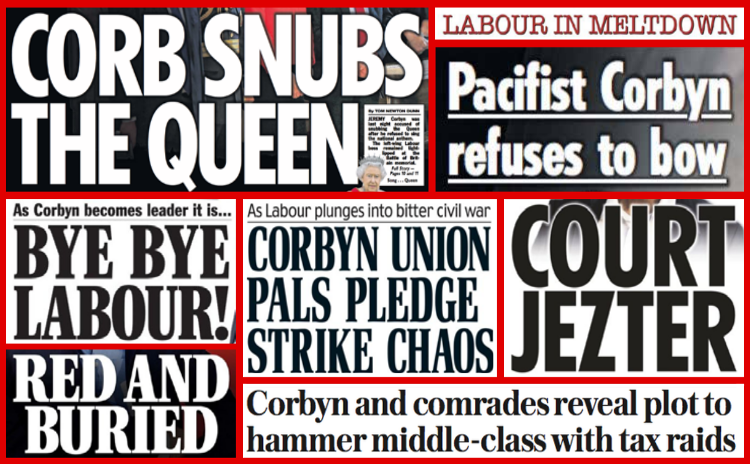 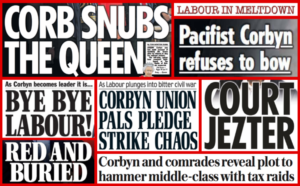 Research on press coverage of Jeremy Corbyn’s first week as Labour leader that was originally published by the Media Reform Coalition in November 2015, has been updated to include an Appendix that considers some of the key themes underpinning the coverage. Our research indicated how large sections of the press appeared to set out systematically to undermine Jeremy Corbyn with a barrage of overwhelmingly negative coverage. The updated Report looks at key frames that were used to assess Jeremy Corbyn including ‘extremism/moderation’, the future of Labour and the left more generally, and Corbyn’s personal characteristics. The updated Report can be found here.

The research looked at 8 national daily newspapers and their Sunday publications (with the exception of the Star and the FT) and found that out of a total of 494 news, comment and editorial pieces, 60% (296 articles) were negative, with only 13% of stories framed in a positive manner (65 articles) and 27% taking a neutral stance (133 articles).

One might expect news items which make up the bulk of the coverage, as opposed to comment and editorial pieces, to take a more balanced approach. In fact the opposite is true. A mere 6% of stories classed as news (19 out of 292 articles) were positive. Any notion of simply ‘reporting the facts’ in straight coverage of the day’s events appears to have had a restraining effect on positive stories only, suggesting that the default ‘common sense’ position is based on negative assumptions.

Among comment pieces, there was slightly more positive coverage (22%, or 34 out of 155 articles), but negative stories far outweighed these (57%, equal to 88 articles). The picture was similar for editorial pieces where 60% ( 27 out of 47) were hostile to Corbyn.

100% of the editorials in the Sun, Mail and Express titles (including their respective Sunday publications) were negative towards Corbyn in his first week as Labour leader.

The research follows Shadow Chancellor John McDonnell’s recent statement that the Labour Party should ‘commit’ to media reform and consider how to ‘break up’ existing concentrations of media ownership.

Dr Justin Schlosberg, chair of the Media Reform Coalition, welcomed this commitment as timely and necessary. ‘In a democracy newspapers have every right to take a partisan line, but what concerns us are the skewed ownership structures underlying this kind of political intervention. The risk of undue influence on elected politicians is high, and it is hard to see how democracy can flourish when the mass channels of debate are monopolised in this way. Let’s not forget that Jeremy Corbyn was elected leader of this country’s main opposition party by 250,000 people, which is 100,000 more than the number of people who elected David Cameron as leader of the Conservatives. It is surely a problem for all of us when newspaper owners are actively seeking to undermine a democratic mandate of that scale.’

Another report by the Media Reform Coalition revealed that just three companies – Rupert Murdoch’s News Corp, The Daily Mail & General Trust, and Trinity Mirror – control over 70% of the national newspaper market, a market that may be shrinking but is still crucial in setting the agenda for the rest of the media. Among the remedies being proposed by the Media Reform Coalition are clear ownership thresholds, safeguards to ensure journalistic and editorial autonomy, and arms-length funding for community news and independent start-ups.