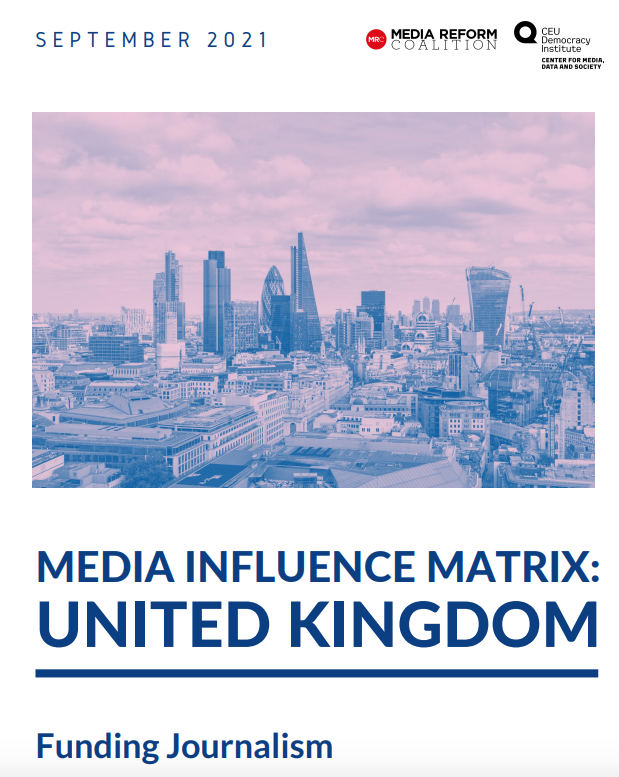 We have just published, in association with the Centre for Media, Data and Society at Central European University, the second part of our major research into the UK media landscape, the UK Media Influence Matrix. This report, written by Leo Watkins, focuses on the funding of journalism and provides a comprehensive account of consumption trends, financial performance, key funders and influencers.

On the need for public funding to avoid the dangers of a profit-led news media:

“Some form of public subsidy is the only option left but it is not one that the UK’s policymakers or the commercial press publishers appear to have much interest in exploring – most likely for two reasons. First, subsidy is seen by many in the press as contradicting their deeply held belief that they are, and always should be, independent of the state. Second, subsidies might come with strings attached that would require some of the UK’s tabloid titles to choose between either radically changing their journalism and improving their editorial standards – in effect, changing their whole business model – or being ineligible for the money. In other words, subsidies for public interest journalism are not of much interest to some major UK news publishers because that is simply not the kind of journalism they do.”

On the continuing influence of legacy providers and sources:

“The UK has many media whose influence is far greater than their bare circulation or audience numbers would suggest. In some cases, this influence is over elites in politics, the state, business or the media. In other cases, it is influence over other social groups: for instance, professional, cultural and intellectual strata, or the activist layers of the political left, centre or right beyond the professional political elite concentrated at Westminster. Many of the most influential media in the UK are in print (though they increasingly have websites, email newsletters, podcasts and apps extending their presence online). The most influential news media organisations in the UK, overall, are still the ‘quality’ press: The Times, The Telegraph, The Guardian, the Financial Times and The Economist.

These are the news media whose reporting and opinion matters most to Britain’s political and media elites…The Times, The Telegraph and The Guardian in particular have great inter-media agenda-setting power, often ‘leading’ the news agenda of the UK’s major broadcasters. Partly as a result of that, they have great power to set the political agenda too.”

The first part of the research on ‘Government, Politics and Regulation’ was published earlier this year.

The final part of the research, focusing on ‘Technology, the Public Sphere and Journalism’ will be published next month.