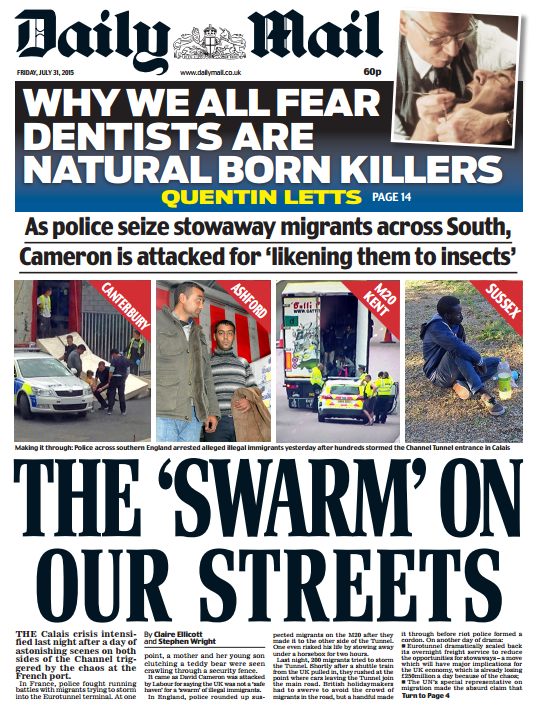 Criticising the current state of the English language can be risky; one can easily (and in many cases, justifiably) be accused of snobbishness and elitism, countered with the argument that language evolves and that we should all be willing to adapt to it. And while this is true to a point, it’s incredibly important to remember that language is a tool developed by humans in order to exchange ideas – and, like any tool, there are those who learn how to manipulate it for their own means.

The dangers of language as a mode of manipulation are largely connected to their use by those in positions of widespread influence, i.e. politicians and journalists. With the right experience and training, it becomes easy for a writer to use a few language tricks to try to push readers into assumption and interpretations that may be entirely false, creating a narrative that better suits the writer’s interests.

For instance, a writer’s choice of words can change the tone of a story and therefore affect the reader’s interpretation of the piece. The most prolific offender in current times is the word ‘clashes’, which you’ll find used again and again and again and again in media headlines. The issue here is the association that most readers will have with that word: the coming together of two opposing but equal sides, like two grand armies on a battlefield. However, more often than not, these two sides are in no way equal. When ‘protestors clash with police’, only one side has military-level weapons and armour. Only one side has the equipment and the numbers and the lawful impunity to beat the other side into submission.

This is an example of euphemism, of using a polite, sanguine term to describe something barbaric to detach an idea from its meaning, and therefore cover up the truth of an event. And it doesn’t stop at ‘clashes’. The term ‘collateral damage’ now has common usage in our language, and is certainly a lot more palatable than ‘murdered civilians’, the term it was invented to replace. We hear talk of ‘peacekeeping efforts’, which involves the deployment of military units and a suspicious lack of peace on their end. Euphemism is an important tool in the spinning of a particular narrative and allows the horrific things happening in the world today to have no purchase on a reader’s mind.

Euphemisms can also be used in reverse: if the writer wants to stir up fear and hatred of a subject or a people, they can use certain words and phrases to do so. A common example is ‘illegal immigrant’. By this, a writer means someone who has entered a country through some means other than the recently hardened official channels, such as the UK’s indefinite leave to remain system. This can include victims of sex trafficking, and refugees fleeing a warzone: people who don’t have the time or the resources to go through proper channels. But describing them as ‘illegal’ implies that they are criminals, and are coming into the country for crime and crime alone, and therefore invites the reader to create a new, false narrative around the subject themselves.

Look also at David Cameron’s claim that a ‘swarm’ of migrants were invading the UK, creating associations with insects or vermin. This kind of dehumanising language is incredibly common when attempting to turn the public’s perception against people who want nothing more than the chance to apply for British citizenship.

Once a writer has chosen the words that would best skew perception to one side, they can then turn to their sentence structure. In English, sentences are generally composed like so: subject, verb, object. That is to say, ‘the person (subject) sat (verb) on the chair (object)’. This order is called the Active Tense and is the standard in English. However, a writer can use the Passive Tense instead, which is composed object, verb, subject; with reference to our example, ‘the chair was sat upon by the person’. This, ordinarily, doesn’t have a particularly strong effect on the interpretation of the scene, other than the implication that the chair has the agency in the sentence – something we can easily dismiss as wrong.

The problem arises when this technique is used in similar situations to the ones mentioned earlier. If there is one party with clear malicious intent, then you can use the Passive Voice to try and imply away some of their agency. Take the following headline: ‘Protesters Dispersed With Tear Gas’. The protesters are the object of the sentence, the ones being acted against, and yet are the ones featured first, implying their dispersal was a naturally occurring phenomenon. Note how this headline actually does away with a subject entirely (the police who dispersed the tear gas are the subjects) to hide the subject’s agency in the scene even further.

Similarly, have you ever heard a politician admit fault by stating that ‘mistakes were made’? This is another instance of the Passive Voice; by deleting the subject (in this case, the politician themselves) and putting the object (mistakes) at the forefront, it sounds as if these mistakes were sprouting out of holes in the ground, and were not illegal wars that caused the deaths of thousands.

A further problem with the Passive Voice is that in some cases it sounds a little more elegant, like something Shakespeare cut from one of his plays for not being in iambic pentameter. We’re all guilty of reading a sentence and not looking into its subtext due to how well it is crafted, particularly if close reading isn’t one of our strong suits. This kind of sentence, therefore, may deter further probing, and present an initial barrier to reading between the lines, leading the reader to accept the initial understanding as fact.

The final trick in the language manipulation set is contextualisation. Put in the correct context, a writer can create associations between two potentially disparate pieces of information. Take as an example, the infamous bee sting incident. After a climate protest in 2008, the police who attended claimed that 70 officers had been injured during ‘clashes’ with protesters. (It was then revealed that this number was significantly lower, only 12. This is another option for skewing perception: outright lying.) These injuries, however, were later reported as wasp stings, sun-stroke, and back pain on the day following the protest. So while the claim ‘officers injured during protest’ is technically accurate, by using the Passive Voice and placing the injuries within the context of the protest, the reader infers that the injuries happened as a result of the protest – which, of course, they didn’t.

So by using these interrelated tricks, a writer can simply and easily imply causation, assuage the agency of guilty parties, and manipulate the reader’s perception of issues, events, and people. This can allow politicians to get away with abhorrent behaviour, police brutality to run rampant, and war crimes to go unchecked. So while language does indeed evolve, we must remember that it is a tool created for our benefit, and we need to always be aware of the potential harm it may cause.

Calum Rosie is a writer based in Edinburgh, and a correspondent for Immigration Advice Service, a company that specialises in removing the stress from any immigration process, maximising your chances of a successful outcome.