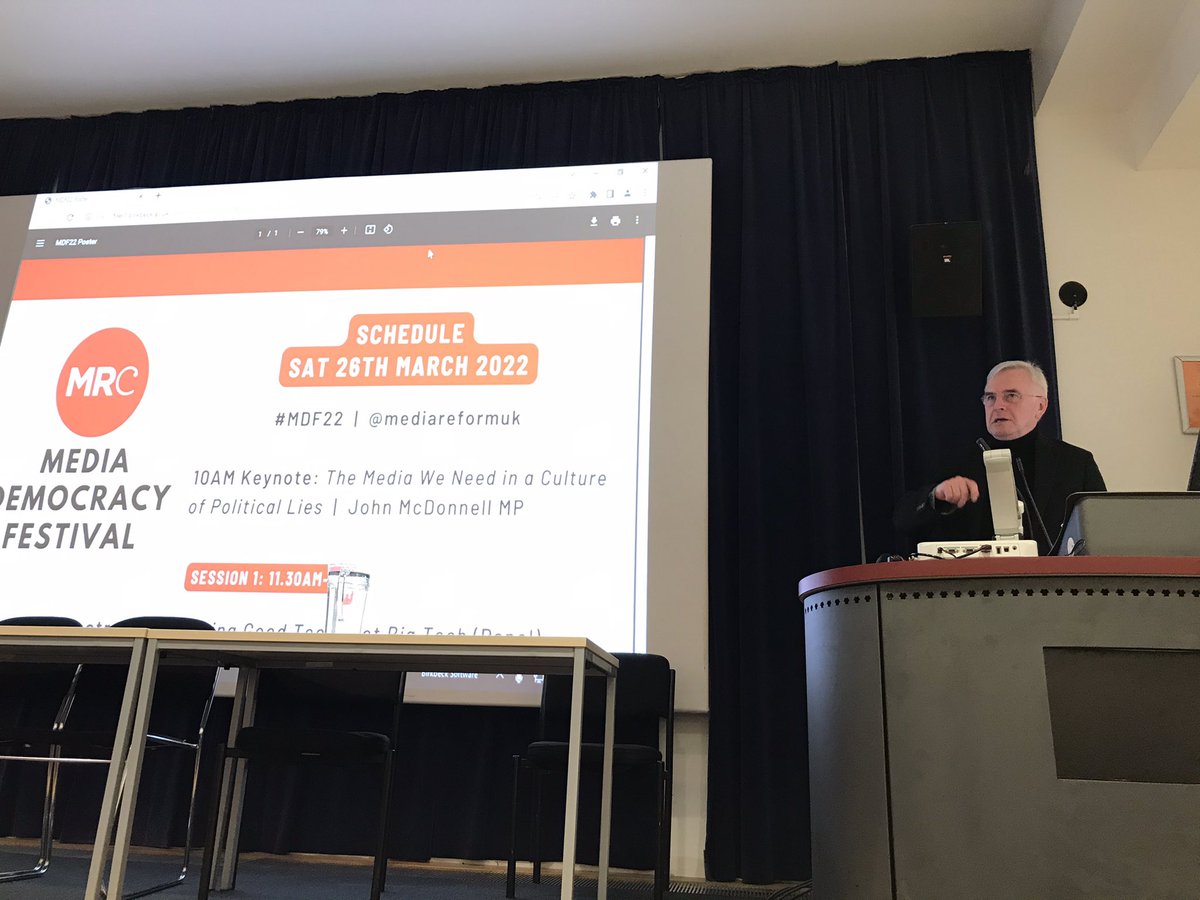 Last weekend the Media Reform Coalition welcomed former Shadow Chancellor John McDonnell to deliver the keynote at the annual Media Democracy Festival in London. Below are the opening remarks from our chair Tom Mills welcoming John and kicking off the festival. Our huge thanks to John for joining us and for everyone who participated in the event.

Hello everyone and a very warm welcome to the Media Democracy Festival. I’m delighted to welcome our keynote today John McDonnell MP, who needs no introduction.

Of course John’s interests are much, much broader than questions of media power. But my view, and it is a view likely shared by many people here, is that you cannot separate questions around the political and economic structures of society from issues of media and communications. That’s not just because media structures are inherently political. It’s also because any movement for political change necessarily involves communication. It is an issue which is too often relegated in political discussion, but in fact cannot be ignored.

This was well understood by the political and social movements of the mid-20th century and by the intellectuals of those movements. Society’s media and communications systems are not merely an ideological overlay to its real, consequential, determinate material relations. As Raymond Williams argued, culture and communications are themselves fundamental features of human society, and in Marxist terms are material. Or to put it another way, as Des Freedman shows in The Contradictions of Media Power, the media is not separate from the structures and networks of class power, they are an integral part of it.

The point is that any movement to change society cannot ignore the question of media power. For one thing, if you have any realistic prospect of success the media power structure will no longer ignore you. As John of course experienced first-hand.

In electoral terms the media represent a serious obstacle to left parties. The newspapers and broadcasters can make or break a party or candidate. The platforms can effectively silence political movements and voices. This leads to accommodation with power, to compromises and co-option. It strengthens conservative forces across society. And on the left it leads – at best – to a top down strategic orientation which in my view is ultimately self-defeating.

Egalitarian movements succeed when they build up independent sources of organisation and social power. And it follows from what I said before that this means building up independent systems of media and communications, while at the same time developing a vision and programme of how society and social structures will be transformed, which again necessarily means the transformation of systems of media and communications – a vision that can be developed and shared through independent organisations and networks.

At the Media Reform Coalition we’ve tried to develop a policy agenda based in academic expertise, but also to think beyond the strictures of academia and the policy world. To think about fundamental transformation and, as the name of this festival suggests, democratisation. One of the reasons I’m delighted to have John with us today is that his effort to develop a political agenda around devolving power and democratising institutions so as to move beyond top down 20th century political and social structures inspired some of the work we have done, around the radical democratic reform of broadcasting, for example.

Most recently, in our Beyond the BBC project, rather than starting with the legacy media institutions, we started with the question of what kind of society we need to build and therefore what kind of media we need to nurture and sustain such a society. This led us to the concept of the Media Commons, which allows us to think beyond the existing institutional framework and to imagine our media and communications systems, and our culture, as a collective resource.

That task of social transformation is greater now than ever, even if the political opportunities in Westminster have changed for the worst. For me, and perhaps John will disagree, the movement he led did not offer the immediate prospect of socialism in the UK. What it did offer was the possibility of bringing us back from the brink. It offered a change in political direction away from social crisis and ecological catastrophe. It failed in that regard, but it nevertheless laid the groundwork politically and intellectually for that task, which remains whether we like it or not.

Changing the course of capitalist society and building democratic alternatives is no longer a matter of personal preference, values and so on – if it ever was. It is a matter of human survival. And it means discussion and debate of the type we are engaged in today, and it means organising and building organisations. I know John will remain an indispensable voice in this task, and I hope we at the Media Reform Coalition, and everyone here, will also play an important part, not only in critiquing media structures, and defending public media, but in developing a positive agenda and building media organisations that can support, nurture and sustain the sort of change we so desperately need.