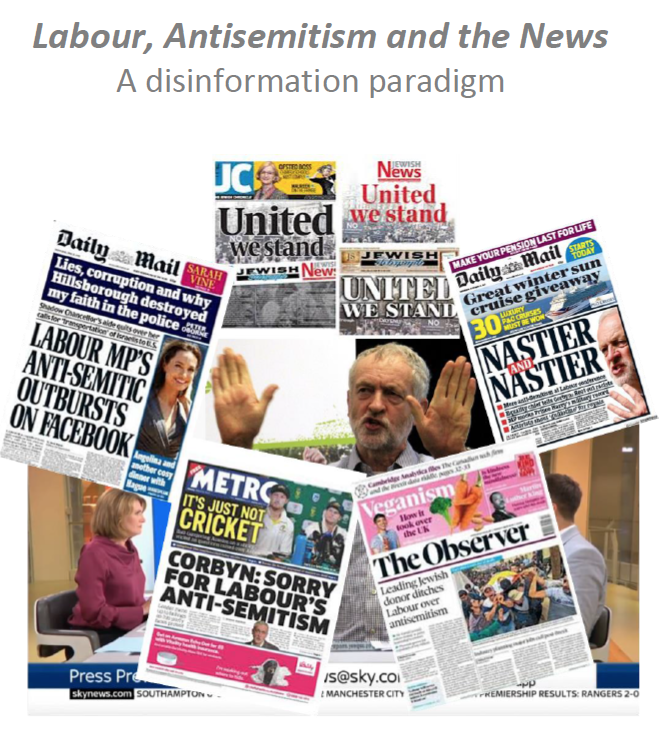 The Media Reform Coalition has conducted in-depth research on the controversy surrounding antisemitism in the Labour Party, focusing on media coverage of the crisis during the summer of 2018. Following extensive case study research, we identified myriad inaccuracies and distortions in online and television news including marked skews in sourcing, omission of essential context or right of reply, misquotation, and false assertions made either by journalists themselves or sources whose contentious claims were neither challenged nor countered. Overall, our findings were consistent with a disinformation paradigm.

We use the concept of disinformation to denote systematic reporting failures that broadly privileged a particular political agenda and ideological narrative. This does not mean that these failures were intentional or that journalists and news institutions were inherently biased. We recognize, for instance, that resource pressures combined with acute and complex controversies can foster particular source dependencies or blind spots.

Nor does our research speak in any way to allegations of smear tactics. To interrogate the root causes of disinformation would necessitate a far more wide-ranging study than was undertaken here. We start from the well-founded assumption that concerns about antisemitic hate speech within the Labour Party are genuine and not necessarily or entirely misplaced. There have been unambiguous examples of racist discourse invoking holocaust denial, generalized references to Jews in stereotyped contexts, and critiques of Zionists or Zionism that explicitly use the terms as proxies for Jews. Some of these cases have involved holders of official positions within the party, including local councilors.

Alongside such cases, there is a contested category of discourse that may be considered offensive or insensitive but not necessarily racist. Indeed, determining what counts as antisemitism lies at the heart of the wider controversy that has been played out in reams of column inches and air time since 2015, and with particular intensity during the spring and summer of 2018. We reserve judgement on this central point of contention but acknowledge legitimate views on both sides, as well as a spectrum in which relatively extreme and moderate positions are easily identifiable.

We recognize that this controversy – on the surface at least – involves prominent voices in a minority community accusing a major political party of harbouring racism directed towards them. What’s more, these voices have been vocally supported by many high profile Labour MPs. In such circumstances we expect journalists to take these concerns seriously, view them as inherently newsworthy, and not necessarily afford equal time and attention to contesting views. It is also important to stress that journalists must be allowed – on occasion – to get the story wrong: the public interest is never served by an overly cautious press.

But we do expect professional journalists to strive for accuracy, to establish essential contextual facts in any given story, and to actively seek out dissenting or contesting opinion including, in this case, within the minority group in question, within other affected minorities, and amongst relevant experts (both legal and academic). Nor do the particular complexities and sensitivities absolve journalists of their responsibility to offer a due right of reply to the accused or to interrogate contentious claims made by sources on all sides.

Overall, we found 95 clear cut examples of misleading or inaccurate reporting on mainstream television and online news platforms, with a quarter of the total sample containing at least one such example. The problem was especially pronounced on television – which reaches far wider audiences by comparison – where two thirds of the news segments on television contained at least one reporting error or substantive distortion.

Underlying these figures was a persistent subversion of conventional news values:

In fact, we established through background case research that

Virtually none of this essential context found its way into news reports of the controversy. Instead, the Labour Party was routinely portrayed by both sources and correspondents as beyond the pale of conventional thinking on the IHRA definition.

This matters because although the manifest issue at stake is not outwardly political in nature, the controversy is inextricably linked to a wider ideological conflict that has been playing out within the Labour Party for some years, and within British politics more broadly. To that extent, such controversies bring into sharp relief the news media’s role and responsibilities in nurturing inclusive public debate and contributing to an informed citizenry.

It also matters because the misreporting of antisemitism risks normalizing or distracting attention from certain forms of antisemitic discourse. Distortions also risk stirring racial tensions by provoking counter-outrage that may be misdirected at Jews on either the left or right of the political spectrum. It is notable in this respect that in 2016, a Daily Mail columnist who has been outspoken on this issue described one Corbyn supporter as a “useful Jewish idiot”; whilst in 2018, the Prime Minister’s warm congratulatory words offered to her Malaysian counterpart – a leader who has openly described himself as an ‘antisemite’ – received barely no attention at all in mainstream news, despite antisemitism being such a salient issue on the news agenda at the time.

In sum, although our findings do not engage directly with the controversy – shedding no further light on what is antisemitism nor how prevalent it is within the Labour Party – we can say with some certainty that there have been prevalent errors, omissions and skews in the mainstream coverage.

This was no anomaly: almost all of the problems observed in both the framing and sourcing of stories were in favour of a particular recurrent narrative: that the Labour Party has been or is being lost to extremists, racists and the ‘hard left’. Some of the most aggressive exponents of this narrative were routinely treated by journalists – paradoxically – as victims of aggression by the party’s ‘high command’.

During the summer of 2018, this controversy reached fever pitch amid claims that the Labour party had become ‘institutionally racist’ under the leadership of Jeremy Corbyn, and that the prospect of a Corbyn-led government posed an ‘existential threat’ to Jewish life in Britain. It has given rise to vocalized threats of a split within the party, further destabilizing politics and signaling a potentially profound reshaping of the British political map. At a time when the country is entering the final stages of its negotiated withdrawal from the European Union, these findings warrant urgent attention from journalists, editors, policymakers and activists alike.

You can read the executive summary here.