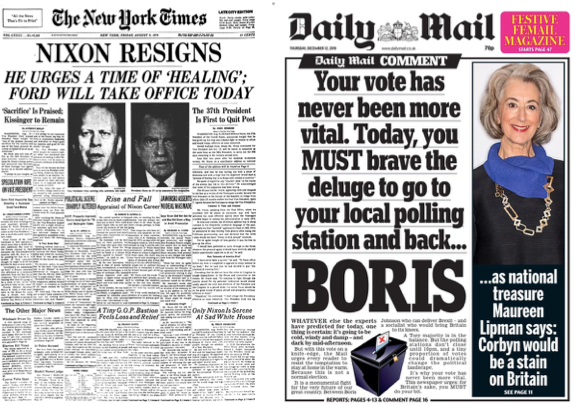 There are many things that attracted me to pursue a career in journalism. Mainly, that I might as well monetise my irritating love of 24 hour news I inherited from my father.

In some ways, this is an unfortunate ambition because it is no secret that the British media is largely biased towards the right. From my point of view, it is unclear whether this reflects the views of their audiences or structures of ownership but, either way, objectivity is not their strong point. Lots has been said about this already and I’m not here to explain that to you even though it does make me question my career choice.

I want to be the type of journalist who is free to question the status quo and to develop a fresh perspective, away from the pale and the stale – a little less Succession and a little more Spotlight.

As I read all the post match analysis following the election, I felt disappointment in the coverage of the campaign. Did we just score an own goal? Was it the fault of the job I want? Am I going to come out of university and be part of the problem, puppeteering for a worldview that desperately needs to be challenged?

As journalists we may want to be idealistic and ethical but surely we must oblige an editor? What if their lines are ones we do not want to cross? A free press is a vital part of a functioning society. It calls people to account and shapes outcomes, even if subtly. The Windrush Scandal was unearthed by journalists. Watergate was discovered by journalists. Laws have been amended by the work of journalists. However, this election leaves those with progressive values with a dirty taste in their mouths.

In terms of the 2019 general election, journalism failed to keep up with the high expectations I have for it.

Firstly, love him or loathe him, Corbyn’s Labour party got a battering in the press.

It was outrageous from people who should know better, and do know better. The framing around debates and the issues that were covered heavily skewed towards the Conservatives. Arguably, the right wing press handed Johnson the keys to Number 10.

When the exit poll came out on Thursday, everyone was quick to say “I told you so”. Stories aired about the supposedly doomed leader. Twitter was alight with people muttering about how people on doorsteps expressing loathing of that Corbyn; that communist, that terrorist sympathiser, that anti-semite.

After Labour’s worst general election performance in living memory, the author Priyamvada Gopal said this person they called Corbyn was “a media construct around whom hysteria was whipped”. He didn’t exist, he was a figment of the Rupert Murdoch, Richard Desmond, Barclay Brothers owned press.

If I listed all the examples of the press not doing their jobs, it would never end. One that sticks out to me is the wall to wall coverage of Ian Austin’s urging people to vote Conservative because Corbyn’s racism made him irredeemable.

I remember my glee when Channel 4 News’s Jon Snow questioned the ex-Labour MP’s assertion. He asked him if he really thought that Boris Johnson was the real anti racist, a man who has penned many a bigoted newspaper article, and still has been elected to Mayor, and now Prime Minister twice.

But for every Jon Snow, there are hundreds of bad apples. The queen of these includes Laura Kuenssberg, whose worst moment was not incorrectly and weirdly confidently explaining what ‘shitposting’ was. She spearheaded the BBC’s terrible election coverage. Dipping as low to tweet to her million followers, completely falsely and unchecked, that a Labour activist had punched Matt Hancock’s advisor. Any of the great people who spoke about journalistic methods to my classmates and me would say that a little verification would take Kuenssberg a long way. A simple watch of the video would have cleared up the whole mess, but apparently “unnamed advisors” know more than your own eyes.

Another highlight of this was the Leader’s Interview debacle. While no one could force anyone into an interview with Andrew Neil, it was poor form to even proceed with the other leaders without securing a date for an interview with the Conservative leader. Neil’s viral video plea for Johnson to face him was powerful but it did not make up for that mistake.

During Corbyn’s face off with Neil, focusing on the anti-semitism scandal engulfing Labour when he has apologised already many times seemed forced. This dominated the headlines for days. Again few column inches were given to Boris Johnson’s own racism; a man whose words have given rise to hate crime towards Muslim women after comparing those who wear the burqa to “letterboxes”. These comments caused a spike in hate crime affecting an already vulnerable group. He’s called gay men “bum boys” and black people “picaninnies with watermelon smiles.”

I’ll admit, Corbyn’s manner with journalists often leave little to be desired. It’s a bad look for politicians to be seen to commanding them, telling them what to report on, no matter how correct they may be. Journalists and politicians are not meant to be friends. They are meant to clash, but journalism is supposed to be more than a mouthpiece for the ruling classes. His election manifesto was not the second coming of the Communist Manifesto, but rather a sensible social democrat programme of policies, very similar to the Scandinavian model.

However, perhaps out of sheer madness, I believe the media can be morphed into something better. There can be an election where each side is fairly represented. The UK is a deeply divided place, in many different ways by class, race and region, and it ought to reflect that, not just in news rooms but, crucially, in editorial meetings and at the very top of the industry.

Clara is an MA Journalism student at Goldsmiths, University of London and tweets @clara_ish