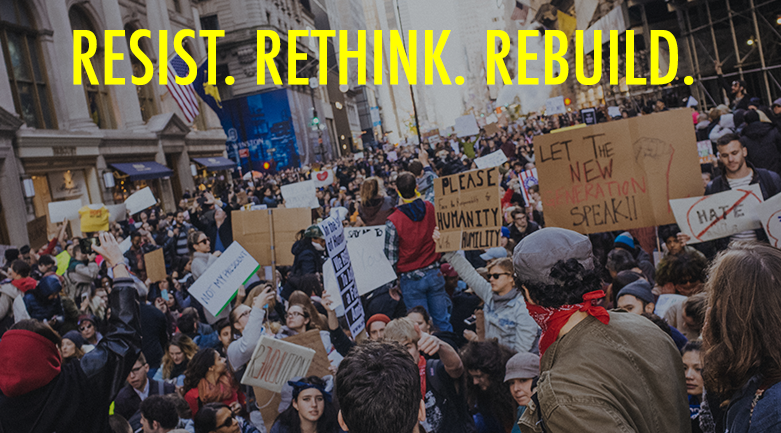 We reproduce here a powerful statement from our friends at Free Press in the US in reaction to the election of Donald Trump as president-elect. The need for media reform – both in the US and here in the UK – has never been greater and we urge you to support the work of Free Press and media reform movements across the globe.

Donald Trump’s victory poses a serious and immediate threat to our friends and families, our loved ones and neighbors.

We must use whatever power and privilege we have to stand up against attacks on Black people, Latinos, LGBTQI people, Muslims, women and immigrants. We must stand with people who are living in fear and support the social movements leading the struggle for equity and justice.

We started Free Press to fight for your rights to connect and communicate — and that’s exactly what we intend to do.

Everything we’ve fought for at Free Press over the past 13 years is in serious jeopardy. The Trump administration represents an existential threat to an open internet and to an adversarial press. It threatens our fundamental human rights to speak freely, organize in our communities, protest in the streets, and govern ourselves.

Here’s what we will do next:

Resist. Trump and all the industry lobbyists flooding Washington will try to roll back all of our victories — starting with Net Neutrality. The lobbyists will have no problem adjusting to the new regime, and they’re ready to dismantle media-ownership limits, privacy protections, and any remaining limits on corporate power. Trump is already leading attacks on the press and accusing protesters of secret plots. We can expect a massive expansion of the surveillance state targeting Muslims, undocumented immigrants, activists and whistleblowers.

This isn’t a time to tinker around the edges. There is no compromise or engagement strategy that can meet these serious threats. The only option is resistance.

We intend to be vigilant watchdogs in our corner of the world, exposing and disrupting any attempts to take away your freedoms or silence dissenting voices. We will call out racism, xenophobia, homophobia, transphobia and misogyny in the media and the government. We will fight any rollback and defend your rights to speak, assemble and organize. We will challenge officials, go to court, take to the streets, do whatever it takes. We will fight back.

Rethink. We’re living with the results of the corporate media’s utter failure in 2016. We have all the evidence we’ll ever need that what’s good for CBS, CNN and all the rest — the companies that made Trump and made billions off this election — is fomenting racism and other forms of hate and literally putting lives in danger. The media system is broken beyond repair.

Instead of accepting the status quo, we must reimagine and recreate a media that is more focused on serving communities than cozying up to power. We must organize journalists to fight for press freedom and find new ways to fund reporting that actually holds the powerful accountable. That’s the work of our News Voices project — and it just got a lot more urgent.

Our political system is failing, too. This moment must be the end of the compromise-at-all-costs, go-along-to-get-along form of politics that got us here. It’s time to rethink everything.

Rebuild. We’re committed to strengthening our organization to meet the challenges in front of us. That means bringing on more organizers and advocates, redoubling our commitment to racial equity, and networking with allied groups dedicated to transforming our democracy and society.

The best answers to our biggest questions — how to break up these big companies, how to confront the new gatekeepers like Facebook and Google, how to challenge racism in the media, how to win in the age of Trump — will come from the outside, from the grassroots, from the people who haven’t been invited to the table before. The best answers are going to come from you.

We believe the big changes we need can only happen if we work with and within social movements. We will show up for our allies and step up whenever and wherever we’re needed.

Right now victory may seem impossible. But we’re in this for the long haul. And we’ve shown time and again that — no matter who the president is — we’re willing and able to agitate, organize and mobilize.

We’re facing our biggest challenge yet. But one thing hasn’t changed: I believe we will win.

We need your help to fuel the fight: Please give what you can today. We don’t take money from business, government or political parties and rely on the generosity of charitable foundations and individual donors like you. Thank you!