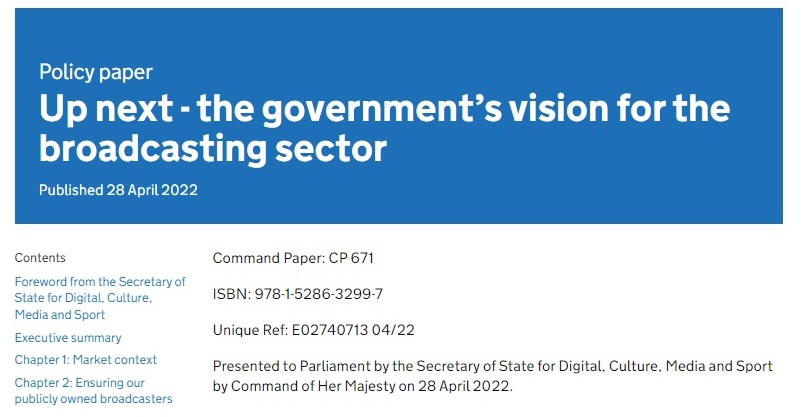 The government has published its broadcasting white paper, Up Next: the government’s vision for the broadcasting sector. The white paper touches on many different issues from content regulation of streaming services, to BBC funding, the prominence of and obligation on public service broadcasters, and the licensing of local TV stations. However, it is the proposed privatisation of Channel 4 – for which the government has no democratic mandate – that is most controversial and far-reaching in terms of cementing the power of market forces in the UK media landscape.

The government’s statement on the white paper, which includes comments from culture secretary Nadine Dorries, is hugely misleading. In seeking to justify its policy on Channel 4, it draws attention to a series of issues which either would not be rectified, or alternatively would be worsened, under private ownership.

In an effort to make Channel 4 appear redundant, the government claims that its founding purpose was ‘to provide greater choice for audiences’. In fact, Channel 4 was not and is not tasked with providing more consumer choice, but with commissioning alternative, innovative content, and catering to underrepresented groups.

Privatisation will achieve neither objective. Markets create incentives for low-risk, homogenous content that caters to the broadest (or most affluent) audiences. Channel 4 already produces a lot of content like this because it has already been commercialised and commissions a significant amount of content from the largest independent production companies.

Indeed, the government acknowledges the fact that Channel 4 commissioning is skewed towards larger media companies, and also highlights the relative lack of investment in content production outside of London. However, it then suggests that the privatisation of Channel 4 will somehow address these problems. We believe that it would in fact do the opposite, and that the proposed sell-off of public assets will seriously damage the UK’s media system. In short, the government has identified problems created by commercial pressures and proposed further commercialisation as the solution.

The government correctly notes that advertising revenue for Channel 4 is likely to decline in the future, and argues that this could be offset by a privatised Channel 4 raising capital, as well as being allowed to produce its own content. But dependency on private investment is not a sustainable model for a national broadcaster, and it is not clear why allowing Channel 4 to produce its own content would  be economically beneficial unless it were bought up by a multinational – such as Netflix, Discovery or Amazon – that has existing production capacity or intellectual property.

The government argues that the only alternative to its own preferred solution of selling off Channel 4 is for taxpayers to make up for any loss of advertising revenue. This ignores the obvious alternative, based on Channel 4’s original model, which would be to tax online advertising revenue. Why not introduce a levy on the big digital platforms who, up till now, have avoided the same public obligations imposed on broadcasters (the white paper already addresses this by proposing that Ofcom regulates streaming services).

Of course there is much more to comment on in the white paper including threats to the BBC to make ‘material and swift progress’ around ‘impartiality and groupthink’, and to move away from reliance on the licence fee – and we will be providing a briefing note on these aspects in due course. It says nothing about media concentration, nor about how to fund and support independent journalism. Instead, it promises to strengthen public service media by selling off one of our most important public service broadcasters, and to relax the public service obligations that make PSB meaningfully different (to the extent that one can still tell) from purely commercial counterparts.

This is a spiteful and ideological move that does nothing to confront the very real problems – the lack of representativeness, adventure, risk-taking, accountability and plurality – at the heart of the UK media system.

For more on the proposed privatisation of Channel 4, read Tom Mills’ article in Tribune and the Media Reform Coalition’s briefing document.