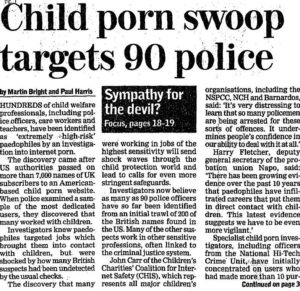 Next Wednesday, 9 May, in the 3rd reading of the Data Protection Bill, the House of Commons may be voting on whether Leveson 2 really should go ahead and to give some teeth to the Leveson regulatory reforms. Below, Adrian Quinn reminds us why this is important in an article originally published on openDemocracy.

Operation Ore caused a press sensation when it began in 2002, probing what was thought to be a huge secret network of child pornography users. It ended up mired in controversy about the unjust targeting of innocent men, some of whom lost access to their children while others – some reports say as many as 30 – took their own lives.

Press coverage was an important aggravating factor. The relationships between reporters and police officers was, and perhaps still is, a matter of concern. No one in the press has ever been called to account, and if Leveson 2 does not happen they never will.

“More leaks than the Titanic”

The future of Leveson 2, which the government wants to cancel, could be decided by a parliamentary vote later this month. If the inquiry goes ahead it would have the power to ask, notably, how a highly sensitive police investigation such as Ore developed “more leaks than the Titanic”, as one journalist put it, helping generate what another journalist described as “systematic injustice”.

One prominent target was rock star Pete Townshend, the Who’s guitarist and songwriter. His name was leaked to the press as a suspected child pornography user. He was cautioned by police and his name put on the sex offenders register in 2003. However his solicitor and a forensic expert who have examined the affair closely, say the police never intended even to question him. Regardless, Townshend was demonised as a paedophile.

Was money paid to Operation Ore officers by newspapers? If so, who authorised the payments? And who exactly should take responsibility for the harm done to innocent victims? Reporters? Junior and senior editors? Proprietors? These are all important questions and Leveson 2 can demand answers.

Operation Ore began when an American FBI team seized a huge database of names potentially associated with online child pornography. A list of 7,272 individuals was handed to the British police. The ensuing press frenzy seemed to shock even leading journalists.

Jane Moore, a journalist at The Sun, wrote at the time: “Operation Ore is Britain’s biggest ever crackdown on paedophiles and thank God for it. But it has more leaks than the Titanic.” Keith Aitken of the Daily Express declared: “There is something shabby, improper and despicable about the speed at which phones seem to start ringing on news desks the instant the police stumble across a famous name in their inquiries.”

Those comments followed the arrest of Townshend, an arrest which – according to Townshend’s solicitor and the journalist Duncan Campbell (a technology specialist who acted as an expert witness for defendants in Operation Ore cases) – would never have happened if his name had not been leaked to the press by somebody inside the investigation.

That view appeared to be borne out by a BBC documentary in which Detective Superintendent Peter Spindler admitted to being “absolutely flabbergasted” by the leak. Spindler was shown in fly-on-the-wall footage, showing his detectives the Sun’s front page about Townshend. The story was billed as a ‘World Exclusive’, with Spindler saying: “The Sun has told us what we’ve got to do today.”

With 7,272 potential targets, Operation Ore prioritised its work. Men in positions of trust or with ready access to children came first. “Popular rock stars were way down the list,” says Campbell, who testified in around 60 Ore cases, “especially popular rock stars with a very minor subscription to a website about which they knew nothing.”

Townshend would later publicly describe his decision to pay $7 to potentially access images of abused youngsters as “insane”. He said he had been trying to research the industry for a campaign. The circumstances surrounding this statement would be a point of interest for the inquiry.

Campbell says that no trace of child pornography of any kind was ever found on any computer or any other device or materials taken from Townshend.

Rebekah Brooks – we have paid the police

How Townshend’s name reached the press and whether cash changed hands would be an important legal issue for Leveson 2 to probe. Two months after the initial headlines, Rebekah Brooks, then editor of the Sun, admitted to the Commons Media Select Committee that “we have paid the police for information in the past”.

The Sunday Times also has questions to answer, that could be dealt with by Leveson 2. The Murdoch-owned paper published an article in January 2003 that left little doubt it had acquired a copy of the entire list of 7,272 names. The Sunday Times’s association with illegal practices has recently been highlighted by the revelations of whistleblower John Ford.

What became gradually clear about Operation Ore, though only after harm had been done, was that the list of names harvested by the FBI included many who were entirely innocent. Their credit cards or card details had been stolen or used illegally by others; some names were included in the database by mistake or as a result of some harmless purchase.

Campbell stresses that Operation Ore did lead to justified convictions. But he also insists there was “carelessness, a media rabble and a tabloid-feeding frenzy to produce systematic injustice’.

The culture secretary, Matt Hancock, sees it differently. In March he told the Commons that regarding Leveson, “We do not believe that re-opening this costly and time-consuming public inquiry is the right way forward.” He told MPs that the “world had changed” since 2012 and the press had cleaned up its act.