David Miranda’s claim that his detention by UK authorities under the Terrorism Act was unlawful has been dismissed by the high court.

Miranda was detained by the Metropolitan Police for nine hours while travelling via Heathrow airport last August. His partner, former Guardian journalist Glenn Greenwald, has worked with Edward Snowden and Laura Poitras to publish the disclosures about the mass surveillance programmes of US and UK intelligence agencies, the NSA and GCHQ.

Miranda was returning from a visit to Poitras in Berlin, funded by the Guardian newspaper, and was carrying encrypted intelligence files ‘in order to assist the journalistic activity of Greenwald’. During his detention, his mobile phone, laptop and other journalistic materials, were seized.

The high court acknowledged that Miranda’s detention and the seizure of computer materials was ‘an indirect interference with press freedom’ but found this justified in the interest of national security.

Lord Justice Laws, the Guardian reports, ‘accepted that agreeing not to publish material simply because a government official had said it might damage national security was antithetical to the most important traditions of responsible journalism but said this was trivial compared with the threat to security’.

The UK Government expressly argued that the release of the Snowden documents (which the free world calls “award-winning journalism“) is actually tantamount to “terrorism”, the same theory now being used by the Egyptian military regime to prosecute Al Jazeera journalists as terrorists. Congratulations to the UK government on the illustrious company it is once again keeping. British officials have also repeatedly threatened criminal prosecution of everyone involved in this reporting, including Guardian journalists and editors.

The basis for Miranda’s detention, the Metropolitan Police have previously commented, is that he was considered to be promoting a ‘political or ideological cause’. Director of Liberty, Shami Chakrabarti has commented that, ‘The express admission that politics motivated the detention of David Miranda should shame police and legislators alike’.

Greenwald’s comments this morning also identified the role of ‘much of the British press … in demanding that the Guardian’s journalism be criminalized’. Columnists and editors have joined politicians and security officials in labelling the Guardian‘s work treasonous and calling for publication of the leaks to be silenced.

This response to the leaks by politicians and dominant voices in the press revealed just how limited debate over issues of great public interest and democratic concern can be. Too few media outlets rise to the task of holding power to account and informing the public, choosing instead to close down discussion of issues which challenge government interests.

David Miranda’s detention, as English Pen notes, has ‘profound implications for press freedom in the United Kingdom’. It is of vital importance that the ability of journalists to effectively report on issues of public interest be defended.

Demand a more diverse and independent media capable of holding power to account. 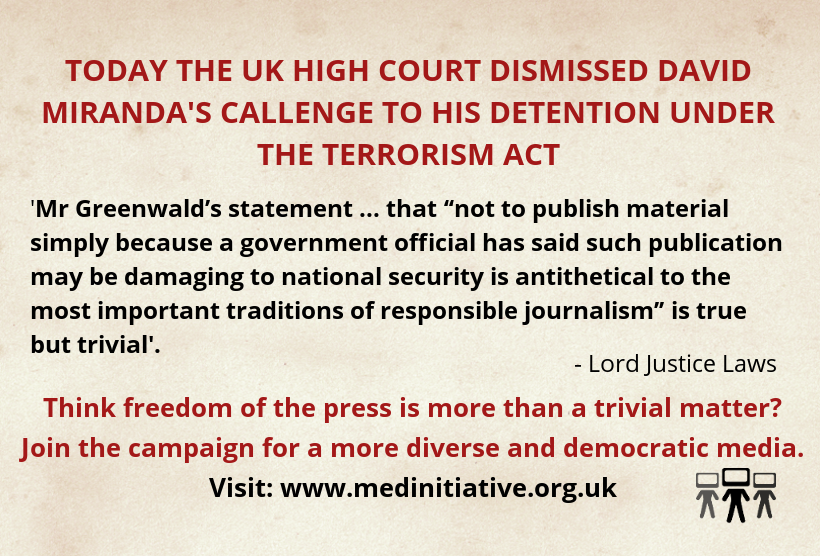 Republished with permission and thanks from the Coalition for Media Pluralism.