As the publication of the Leveson Report looms, it’s natural to compare the British press with that of other countries. Many have claimed that, if we’re not careful, our country could slide towards the lamentable state which afflicts others, such as China, Russia or Syria. In this post, we review various claims about where Britain is going.

Note: we’ve chosen to treat mentions of a country’s leader or dictator as equivalent to mentions of the country itself. We find these are often used interchangeably and that the implication is the same. 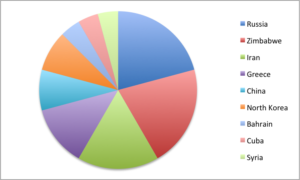 A popular prediction is that Britain will go the way of Greece. Europe’s now-proverbial basket case is a popular comparison due to the case of Kostas Vaxevanis, a journalist who was arrested for publishing a list of potential tax evaders passed to his government by French finance minister Christine Lagarde.

But other commentators look further afield. In the Telegraph, John Kampfner called laws that chill free speech “the preserve of places like China and Russia.” A news piece in The Sun about the NUJ offered as contextual information the fact that “China, Iran, Russia, and Robert Mugabe’s Zimbabwe have state-controlled media.” Zimbabwe got another mention in the Telegraph.

In the Mirror, Alan Johnson urged the government not to respond to the Leveson report by “doing anything North Korean”. For Spectator Fraser Nelson, meanwhile, (who we responded to at the weekend) Bahrain was the touchstone of choice.

All three nations appear in a comprehensive advert by the Free Speech Network, which printed portraits of their leaders with the caption: “These people believe in state control of the press. Do you?” The advert also included another hit for North Korean supreme leader Kim Jong-un and first-time appearances for former Cuban leader Fidel Castro and President of Syria Bashar Al-Assad.

Based on this review, we’re anticipating a strong shift for Great Britain in the direction of Russia, Zimbabwe, and Iran (official languages Russian, English and Farsi, respectively). However, we’ll be watching Lord Justice Leveson’s Thursday speech very closely in order to analyse just where the country could be going if his recommendations are adopted. We’ll keep you posted.