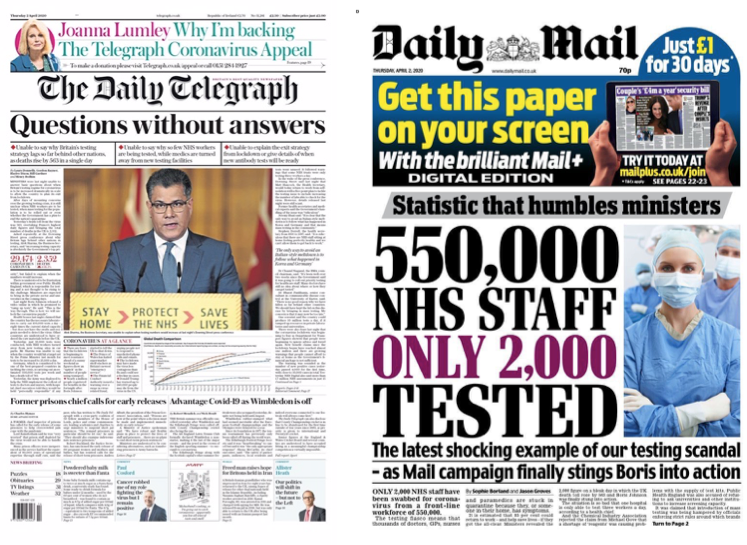 MRC supporters may have noticed some robust headlines around Covid-19 in news titles more commonly associated with supporting the government. Elizabeth Mizon reflects on the motivations for a potential shift in approach but warns against thinking that this signals a fundamental transformation of their priorities.

‘The FT View’, The Financial Times’ editorial page, waves a strong message on its webpage’s central banner: “Since 1888, this newspaper has argued for free markets, free trade, and liberal democracy. These commitments are renewed daily by the editorial board…”

Immediately beneath this on 3rd April 2020, at the top of the list of daily editorials ran the headline “Virus lays bare the frailty of the social contract”; its subtitle: “Radical reforms are required to forge a society that will work for all”.

Since the coronavirus pandemic and the resulting economic crisis hit the global population at 100mph, there has been an equally fast, and quite amazing about-face by the UK’s Conservative government on the importance of protecting the NHS. As the impacts of the crisis develop, conservative commentators are now following suit — apparently feeling a sudden urgency to acknowledge the importance of a strong social safety net, commitment to public solidarity, and the burdens of massive financial inequality.

Acknowledging that monetary policies are likely to benefit the “asset-rich” while requiring deep sacrifice from those with insecure employment, the FT editorial board goes on to declare that “Radical reforms — reversing the prevailing policy direction of the last four decades — will need to be put on the table. Governments will have to accept a more active role in the economy. […] Redistribution will again be on the agenda; the privileges of the elderly and wealthy in question. Policies until recently considered eccentric, such as basic income and wealth taxes, will have to be in the mix.”

Also on April 3rd, The Telegraph’s Lauren Davidson asks banks to put aside their own needs and interests, in alignment with the rest of the country’s efforts. An article in The Times on April 4th, “Top pay threatens to be latest flashpoint”, discusses the halting of bonuses and cutting of executive pay across top UK companies. A remuneration adviser is quoted as saying that as AGM season begins, and shareholders vote on executive pay, it’s going to be “very hard to look your employees in the eye if you’re continuing to earn what you’ve been earning.”

Even the capital-obsessed Forbes published How To Start Rebuilding The Post-Coronavirus Economy Now, a piece with an initially conservative stance. It lays out three bullet points for rejuvenation, following a ‘business as usual’ line until writer Sarah Chamberlain makes her final point: the need for a New-Deal-esque, $4.5 trillion government investment “to repair and update [the U.S.’] crumbling infrastructure.”

The FT’s use of the label ‘eccentric’ is telling; wealth tax is in no way unusual or radical in the minds of the young and/or centre-left. A Reuters/Ipsos poll at the beginning of this year suggested that two-thirds of Americans — including 54% of Republicans asked — were in favour of a wealth tax. Universal Basic Income may be less widely understood, but was — briefly — included in Labour’s last manifesto, and is currently a hot button issue in the US presidential primaries. Mainstream politicians are running on these very issues.

What the right-leaning media refuse to acknowledge is that a strong social safety net has been necessary for the last four decades; the entire time that the right has been dismantling it. People were suffering from a chronic lack of support, opportunity and public provision before March 2020. Only when that lack is thrown into sharp relief, as the precarity of living paycheck to paycheck is tested universally rather than at the mercy of everyday life, will the right acknowledge the inevitability of the social contract. The way that capitalism is built means there will always be a mass of people who need governmental support, crisis or not.

Conservative media acknowledging the need for ‘radical’ change feels like a significant shifting of the Overton window; one which appears as common sense to many on the left, but has simultaneously felt impossible amongst the relentlessness of the last decade. Whether this recession will resurrect and deliver the change we hoped to see post-2008 remains to be seen.

Yet, of course, conservative outlets aren’t suddenly going to embrace these ideas — they’re flirting with them because they know their more well-heeled readers’ shock and fear is making them, too, pine for government intervention. A day later on 5th April, The Sunday Times has already published corresponding think-pieces titled “Demonising the dividend will ultimately punish us all” and “No, Covid-19 hasn’t made Britain socialist”. Unfortunately, the dire need of the precariat must get direr before conservatives stop telling them to pull their socks up.

This article was originally published on medium.com and is reproduced here with the kind permission of its author.