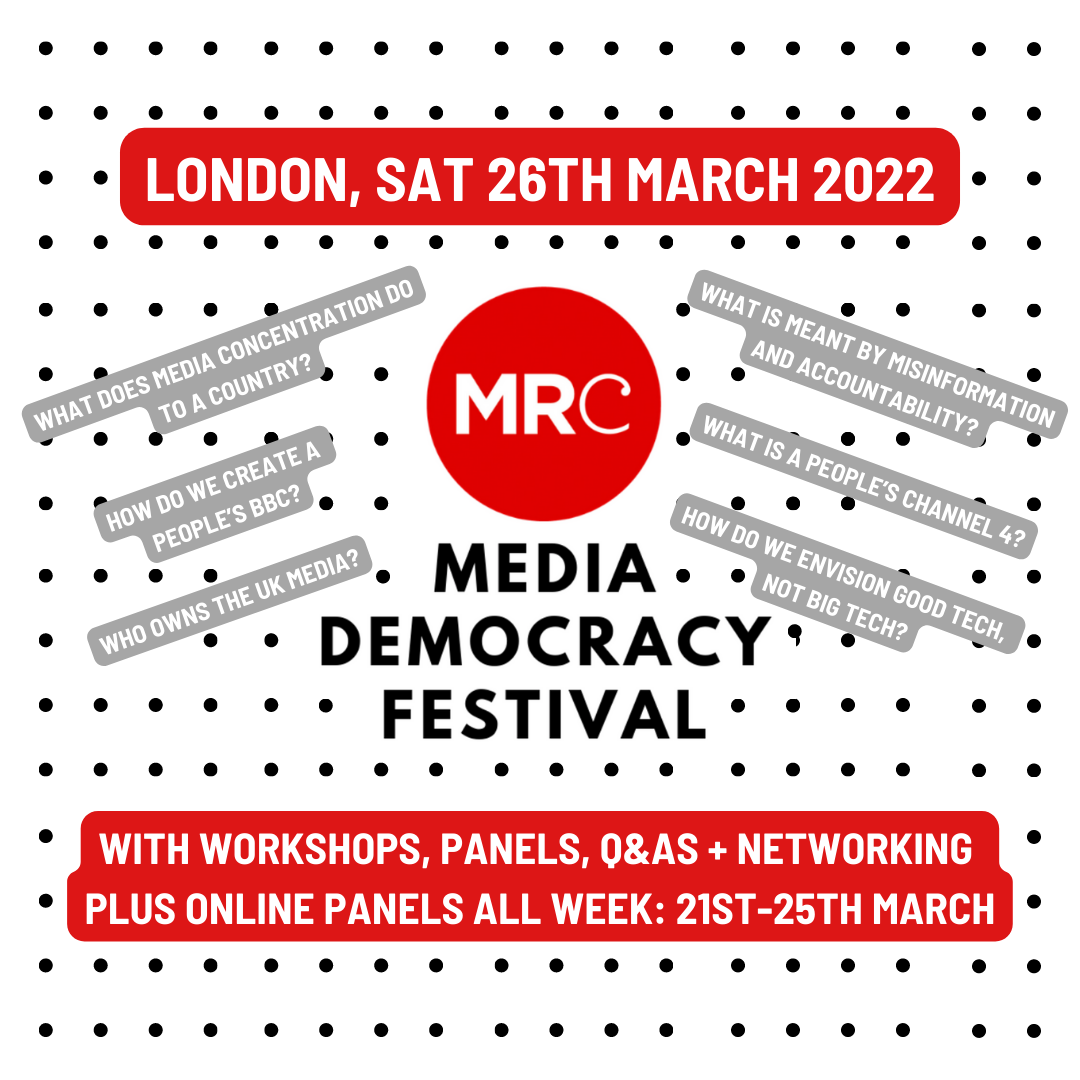 The Media Democracy Festival is back! ​​We’re thrilled to announce that 2022’s week-long celebration of progressive media voices will go ahead with a number of international online events from Monday 21st – 25th March, followed by an in-person event on Saturday 26th March at Birkbeck, University of London. Scroll to see both schedules 👇👇👇

Register for your FREE ticket to the Saturday 26th event.

The festival will consist of action and analysis on the media with regards to the climate emergency, activism, digital rights and privacy, anti-racism, worker power, and more.

Our panels, workshops, seminars and Q&As are led by a range of contributors including activists, journalists, trade unionists and expert academics, who will outline why our current media system is not fit for purpose and how we can transform it to meet our needs this decade.

Huge thanks to our community partner World Citizens London for helping us promote the festival to international visitors and residents of the capital.

All sessions are free, though we would hugely appreciate any donation you can make to the Media Reform Coalition to cover the running costs of the festival.

The opening Keynote will start promptly at 10am.

Lecture Theatre | Keynote: The Media We Need in a Culture of Political Lies

How can we envision an internet that will sustain us into a decade of crisis? For the pursuit of work, leisure, and survival, how do we sustain a progressive digital world and loosen the grip of Big Tech on society?

The concept of a ‘Culture War’ has become a stick with which to batter progressives, derail debate, and stifle action. Rather than learning how to engage in the so-called ‘war’, how do we dispel the notion it exists in the first place and focus on what really matters?

Local journalism is in peril, with journalists who report on their local communities bearing the brunt of layoffs and suffering the worst of the consolidation of media ownership. This workshop will explore how we can sustain local journalism, so journalists can continue to benefit their communities.

Misinformation is not simply a problem with Facebook, it has been endemic in the media industry for as long as it has existed. This panel will demonstrate how the state and commercial interests contribute to this problem, and we will ask how they can be held accountable.

Want to know how to gather, analyse and use data and statistics in your reporting? Caitlin Ostroff will walk you through free resources for preserving information on the internet, including programs to monitor for changes to a website, and tools to analyse and collect data. This will be a broad overview for those with no background on data reporting, showing examples of how specific tools and data have been used in news stories. We welcome all who are curious and want to do storytelling—a fondness for maths and technology is NOT required.

Room 1 | Who Owns the UK Media? The Findings of the Media Influence Matrix Report

Last year the Media Reform Coalition published a comprehensive, 250+ page report evaluating the regulation, governance, funding and ownership of the UK media. It is an essential tool for anyone trying both to understand and to press for changes to the existing UK media landscape.

Come and find out more in this session with lead researcher Leo Watkins.

Room 2 | Manifesto for a People’s Media

In 2021, the Media Reform Coalition canvassed the public to imagine a media system where significant new public investment and new forms of participation ensure that it is independent, accountable, democratic and for everyone. Come and find out more about the Manifesto for a People’s Media in this session with lead researcher Debs Grayson and the former Chair of the Media Reform Coalition, Natalie Fenton.

Rhian Graham of the Colston 4, in conversation with Marcus Gilroy Ware, author of After The Fact?

Rhian Graham and her Colston 4 comrades were found not guilty of criminal damage in January after successfully arguing that their actions to bring down the Edward Colston statue in Bristol were “proportionate” measures. Right-wing news coverage was predictably harsh. The 4 even had GB News summoned to Bristol Crown Court over their coverage, which threatened to prejudice the trial. Rhian Graham of the Colston 4 is with us for a Q&A about how the right-wing press treated them and their fight for justice.

The following sessions will be livestreamed on our YouTube channel, and Facebook Live (all timings are GMT):

We are in a climate emergency and the media has not done a good enough job at raising the alarm. But rather than simply blaming ‘bad journalists’, this panel will help us understand the wider socio-economic problem of how information is created, distributed, and understood – or not.

Australia’s media industry has recently had a revolution… or so some would like you to think. The country’s Big Media and Big Tech have recently gone head to head in a legal fight over who should control billions in advertising revenue, as the government set up an inquiry to investigate the impact of Murdoch’s control over their media. Come to this panel to understand how Australia’s media system is a microcosm of the problems of concentrated media ownership.

A ‘commons’ is a collective resource sustained through the active participation of those who rely on it. In a media commons, our media would be funded through significant public resources, and managed collectively so they serve our needs and help us face the challenges ahead. Come and find out more about creating a ‘media commons’ fit for the coming decade.

This session is a collaboration with CAMRI and the third of their PWR Workshops, a 40th anniversary retrospective of the publication of James Curran and Jean Seaton’s Power Without Responsibility. This session reimagines the media and the internet as essential communication infrastructures in the democratic process, raising questions of institutional design, governance, and enhanced participation.

The UK media industry has numerous unions, and its workers need them –  the creative industries are notoriously exploitative, with low pay, insecure contracts, long hours and endemic abuse. How can media unions play a role in reinventing media worker power over the next few years?

How could we recreate Channel 4 as a true ‘People’s Channel 4’? The channel was launched with a genuinely alternative, and fairly radical remit, and developed the careers of numerous British filmmakers of colour. How can we build public support for a radical Channel 4 fit for the 21st century, and fight the Tories’ privatisation plans? Come to this session to understand what our public institutions could become.

How could we recreate the BBC as a true ‘People’s BBC’? How can we build public support for renewed public media, and create sustainable and affordable alternatives to the licence fee? Come to this session to understand what our public institutions could become.

Watch a video roundup of the 2019 MDF

Watch one of last year’s live-streamed sessions: Stenographers or critics? Mainstream media and the “Westminster bubble”

We look forward to seeing you at #MDF22!