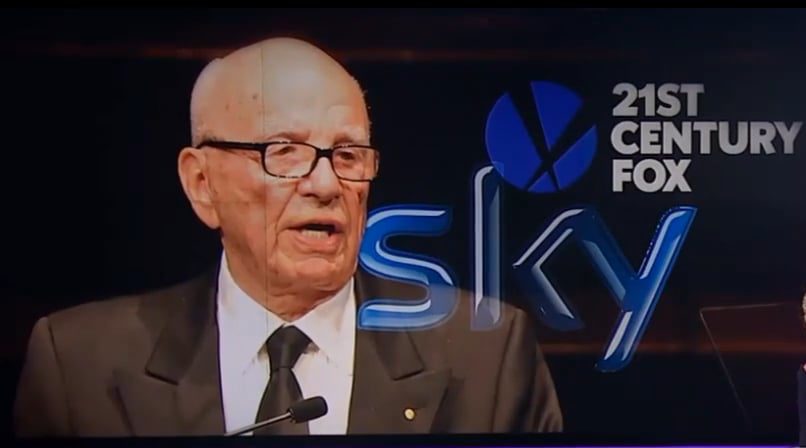 Damning new research suggests the agenda influence of the Murdochs is more extensive than previously thought.. And it would be greatly enhanced were the takeover of Sky to go ahead.

In our submission to the Competition and Markets Authority this week, we have presented interim findings showing that News UK brands (Times, Sunday Times and Sun) play a lead role in shaping the wider news agenda. Examining over a hundred news stories covering UK political, economic and social issues, the research found that the Times and Sunday Times were especially influential, despite operating an online pay-wall.

The research also suggests that Sky News is the dominant provider of wholesale news to the commercial radio sector and the second largest contributor to headline stories on major news aggregators. And when it comes to social media, Sky has a disproportionately large audience relative to page views on its website.

This suggests that significant aspects of Sky’s agenda influence on radio and digital platforms was not captured by Ofcom’s review.

Below is an extract from the report and you can read the full version here.

In phase one of the merger inquiry we submitted new evidence to Ofcom which showed that the market reach, share and impact of major news brands controlled by the merging parties may be significantly greater than previously thought. In particular, our research showed a disproportionate presence of Sky News on intermediary platforms and strongly suggested that Global and Bauer radio stations still rely to some degree on the wholesale news service provided exclusively by Sky (via the Independent Radio News Network). We have now extended that research which reinforces these findings. We have also commissioned new research which shows that News UK titles are among the most prominent agenda ‘leaders’, with potential to exert significant influence over the news agenda adopted by other news sources across platforms.

Two independent studies were conducted over the course of the summer 2017 by academics based at Birkbeck College and City, University of London. They were designed to address and further probe key issues raised by Ofcom’s phase one review in regard to wholesale news provision, consumption via intermediaries and agenda setting power.

First, we extended our analysis of commercial radio bulletins following the pilot research conducted for the phase one review, using a broader sample both in terms of time and number of stations examined. We found strong evidence of shared content across Global and Bauer stations, including the use of identical clips. This further calls into question Ofcom’s decision in 2015 to discount Sky’s wholesale provision to Global and Bauer. On the basis of these findings, we suggest that it would be more appropriate to attribute 50% of Global and Bauer’s wholesale news provision to Sky. That would more appropriately reflect the balance of wholesale input and also have a significant impact on the cross-platform picture of plurality. Based on Ofcom’s 2016 news consumption survey, this would make

In the second study, we mapped out news stories across 29 outlets at several daily time points over an extended period in September 2017. This enabled us to identify particular brands as significant agenda ‘leaders’ (covering stories first that are picked up by other outlets at a later time point). We also collected new data reinforcing our findings in phase one in regards to the comparative reach of Sky News via social media channels. Overall, we found that

The Times and Sunday Times newspapers were particularly influential in our sample, in spite of their relatively low audience reach. This underscores the view expressed by a News UK spokesperson in 2015, defending a controversial story as “responsible journalism and another example of The Sunday Times setting the news agenda.”