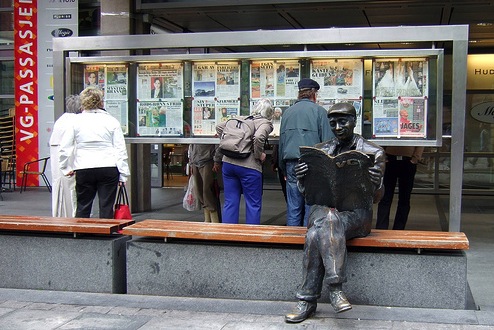 A government-appointed Commission on Media Diversity, focusing on citizens as media users, has recently published wide-ranging proposals to safeguard access to journalism at a time of significant turbulence and change. Here one of its members summarises the political context and the main recommendations of the Commission.

The Norwegian political system and the role of green papers

Norway has a multi-party parliamentary system with a minority government coalition currently based on the Conservative Party and the populist Progress Party. The appointment of independent committees to gather information, analyze current challenges and propose new policy instruments is a stable feature of the political system. The ensuing reports are usually given a public hearing before they are translated into more specific policy proposals, either in full or in part, in the form of white papers. In line with the focus on consensus-based policy-making characteristic of the Nordic model, such committees are not only seen as vehicles to develop policy but also as institutions to prepare the ground for realistic regulations especially through the appointment of representatives of key stakeholders.

The Norwegian media system is characterized by relatively well-functioning editorial freedom for the press, a popular licence fee-funded public service media organization (the NRK), quite egalitarian patterns of media use, high penetration of new media technologies such as smartphones and broadband in homes, and a history of active regulatory measures to subsidize journalism as well as content deemed important for national languages and culture.

The Conservative-Populist government has, by and large, continued on this same path. While it has attempted to make some cuts to direct press subsidies and to prevent any increase in the level of the licence fee, dramatic changes in policy direction have not surfaced. A telling example was a Government white paper on the future of public service broadcasting, published in June 2015. Not only did the Government show strong support for the NRK as a well-funded public institution with a broadly defined remit which includes online media, and with a well-functioning regulatory set up, the white paper also discussed how to uphold a second television channel with public service obligations, run since 1992 by TV2. Following this discussion, a Commission on Media Diversity was announced and formally appointed in autumn 2016.

In line with the aims of the strategy to gather stakeholders for consensual policy-making, the Commission’s ten members included no less than four editors (including Director General of the NRK, Editor-in-charge at TV2, Editor-in charge at the largest digital-native tabloid news site, an Editor-in-charge at a local newspaper), a newspaper owner, one working with digital media in a newspaper and magazine publishing house, and a representative of the Association of Media Businesses. In addition, the members counted one economist and consultant and one media researcher, the author of this article. The Commission was chaired by a former journalist and editor, now Director at the Freedom of Speech Foundation. The Commission’s main report was submitted to the Minister of Culture in early March 2017.

What and who is media diversity good for?

The overarching aims of media policy in Norway are, as in many other comparable states, quite uncontroversial and pretty stable over time: media policy is, ultimately, supposed to advance the right to freedom of speech and democracy. A distinguishing feature with the Norwegian case is the existence of a requirement in the Constitution which grounds these aims. Since 2004, the paragraph on freedom of speech in the Norwegian Constitution includes a sentence referred to as the infrastructural requirement, which states that it is the responsibility of the state to facilitate an open and enlightened public debate. While law scholars disagree on whether or not this should be regarded as “hard law” or not, the sentence is evoked routinely in policy debates and used explicitly in the formulations of the current government’s media policy.

The idea that an open and enlightened debate is needed, and that the state should take responsibility to secure it, is not self-evident. Rather, the idea stems from a model of deliberative democracy which has it that discussion among citizens is a key component of democratic rule. Such discussion is well-served by media diversity, according to the legislative history of the paragraph on freedom of speech. It should, ideally, guarantee citizens’ access to the material they need to become informed, and at the same time promote channels or arenas for public debate. In this context, the Commission adopted the citizens’ perspective and promoted an understanding of media diversity in which exposure to diverse content – themes, perspectives and viewpoints – is key.

The proposals: adjusting existing measures and testing new ones

Based on its analysis of the current media situation, highlighting the challenges with funding journalism and the changes to media use brought on by the move to digital platforms, the Commission published a series of proposals, most of which simply entail adjustment of existing policy tools.

The Commission underlined the key role of the publicly funded and owned media institution NRK, and its role as a driver of media diversity. Further collaboration with other media actors is encouraged, and so is the implementation of core public service values in the institution’s development of new services on digital platforms. The Commission argued that the ownership of the NRK should, as a matter of principle and to ensure an arm’s length distance from government, be transferred to an independent foundation. It also argued that NRK’s funding scheme should remain stable and warned against the potential weakening of NRK’s legitimacy that could follow a move to spend portions of the licence fee on other media policy measures.

On the topic of commercial public service broadcasting, the Commission argued for the continued relevance of linear television and radio for public service provision, as a segment of users continue to rely on these channels for their main news consumption.

Norwegian media policy has long utilized an exemption from value added tax as a general, indirect tool to subsidize the media sector. The Commission proposed not only to retain the exemption but to expand it to include niche-news providers as well as individual articles sold by online providers (typically online news actors as alternatives to subscription).

In addition, the Commission proposed a new indirect measure to aid the transformation to digital platforms and to help fund journalism in an uncertain period: a temporary exemption for Norwegian news media from the obligation to pay the employers’ social security contribution.

As a complement to the indirect measures, Norway has kept direct press subsidies in place. Again, the Commission suggested adjustments, primarily to cut some funds from a handful of newspapers that now get most of the subsidies and, instead, to boost basic support for local print and online news.

The latter scheme should also encompass subsidies to ethnic and linguistic minority media.

In sum, this is an expansive menu and an ambitious attempt to face up to the challenges facing media diversity for citizens in today’s media environment.

It is worth noting that the Commission’s report was unanimous. The fact that stakeholders like the publicly funded broadcaster and the commercial press were able to develop a shared vision for media policy is highly unusual.

After submission of the report in early March, some commentators have reacted to the expansiveness and correspondingly high costs of the proposals. The exemption from social security contribution has been deemed especially unrealistic. Others have criticized the adjustments of the direct press subsidies, either for being too hard on those today receiving large portions of the support or for being too limited in revising the scheme.

During Spring 2017, the report will be the subject of a prolonged public hearing. The next step would typically be for the Ministry of Culture to translate some or all of the proposals into a white paper, presented to the Parliament. However, elections will take place in September 2017 and, as a consequence, the concrete future for the proposals in terms of policy processes are uncertain. Yet, whatever happens, the Commissions’ proposals will hopefully fuel public debate and focus more attention on the significance of media diversity for citizens’ freedom of speech.

You can find more details about the Commission’s work here.