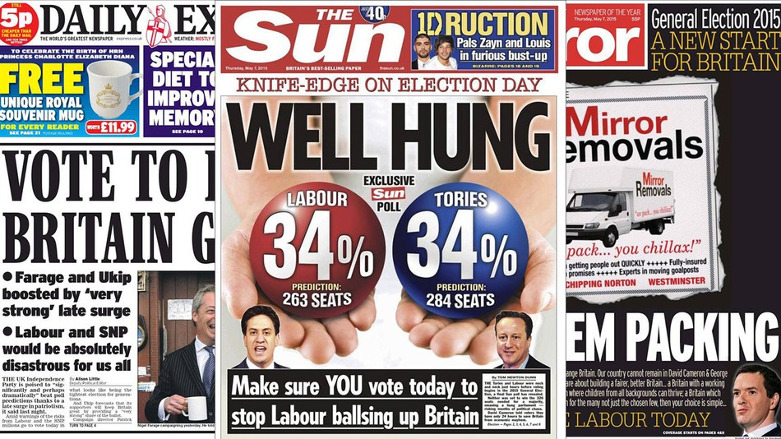 Maybe it should come as no surprise that in the aftermath of the Hacking scandal and the Leveson enquiry that followed media policy was an election issue. Labour, the Liberal Democrats and the Green party pledged substantive media reforms in their election manifestos. Not that you would have known it from the media. The Loughborough study noted that the media as an election topic received only 1.1% of coverage across broadcast and press and when it did appear it continued in the vein of post-Leveson hysteria whereby implementing Leveson’s recommendations became “sinister state censorship” (The Sun).

Media owners made no attempt to disguise their political allegiances in election coverage that has been called the most partisan since 1992. Opinion rather than news dominated. On the 21 April the Independent newspaper reported that Murdoch had told journalists at The Sun that if Miliband got into power then the future of the company was at stake. He then directed them to be more aggressive in their attacks against Labour and more positive about the Conservative Party.

Since 1979 no British government has been elected without the support of Rupert Murdoch but this does not mean it was the “sun wot won it”. However, politicians fear that the power of the popular press may be decisive and therein lies the problem. In this election however, the Leveson enquiry gave Milliband the confidence to stand up to the likes of Murdoch. And when he did his popularity soared. Plus, this time Milliband had nothing to lose – his vilification by certain sections of the press had been relentless: he is weird looking; a geek; clumsy; is terrible at eating bacon butties; his Dad was a Marxist; he did one over his brother and he even had the temerity to have other girlfriends before he got married – what a cad.

There will be much analysis over whether the massively pro-Conservative/anti-Labour press influenced the outcome of the General Election. These investigations will likely be inconclusive – it is too complicated a matter to whittle down to a simple correlation. But we should not only be looking at the few weeks immediately preceding the election for answers.

Early indications suggest that people voted Conservative largely on economic grounds – they felt the financial crash was partly due to an incompetent Labour Party that was now being cleaned up by Tories; that getting the deficit down is the route to economic recovery not Labour’s spending plans. Legitimacy of particular political-economic approaches does not happen over weeks but years. Krugman notes that the austerity ideology that everyone believed 5 years ago as the means to economic recovery has collapsed most everywhere. Everywhere that is bar the Conservative Party in the UK and most of the British media. He points out that on the very day the Centre for Macroeconomics announced that the great majority of British economists now disagree with the notion that austerity leads to growth, the Daily Telegraph published a letter from 100 business leaders on its front page, declaring the opposite.

So it would seem it is still “about the economy, stupid” which massive global media corporations are very much part of and who stand to benefit from an approach that preaches deregulation, privatization and taxation that supports their interests. It is not the “sun wot won it” but the culture of press-politician mutual interest in which media executives and party leaders work together to ‘push the same agenda’ in the words of our Prime Minister, gives powerful corporate media interests excessive influence over and inappropriate interference in the political public sphere.

Meanwhile, despite the desire of the Government to put the issue of press regulation to bed we still have a Leveson framework in place with a Press Recognition Panel (PRP) ready to receive applications from potential regulators this Autumn. The Independent Press Standards Organisation (IPSO – the old Press Complaints Commission with fresh lipstick) will not apply for recognition but another potential regulator, IMPRESS probably will. If a relevant publisher joins IMPRESS then financial incentives for others to follow will kick in. The PRP have a year before they must report whether or not the system for regulating the press has failed. So somewhere around Autumn 2016, if nothing has changed, then Parliament will have to decide what to do next. The Conservative’s slim majority may not be enough to kick an issue with large cross-party support and huge public backing, into the long grass yet again.

It is also worth noting that while the Conservative vote increased by 400,000 (0.8%), Labour’s went up by 800,000 (1.4%) – increasing their vote for the first time since 1997. Issues of media reform did not lose Labour the General Election but without it they may not win the next.