What was exposed beyond any doubt at the Leveson Inquiry hearings was the scope of informal access to ministers enjoyed by major media groups, and their willingness to use those channels to ‘communicate’ regularly and intensely in the build up to plurality decisions. We now know that Jeremy Hunt at best mislead Parliament about the personal contact he had with News Corp lobbyist Fred Michel in 2011, during the supposedly ‘transparent’ process of deliberation over News Corp’s bid to buy out BSkyB. That was over and above the more substantive contact between his office and News Corp revealed to Leveson in a series of email exchanges. It is for this reason that the majority of civil society groups – and indeed the majority of the public – have come out strongly in favour of fixed ownership limits as a means of restoring transparency and accountability to plurality policy.

Ofcom – in line with commercial media interests – have suggested the opposite: that the power to decide when and how to act on plurality should instead remain with ministers. The arguments underpinning this view rest on a number of shaky assumptions. For one thing, it is often taken for granted that fixed ownership limits are ‘blunt instruments’: that they can unduly penalise groups who merely innovate or survive whilst leaving others untouched who are no less impacting on public conversation.

The sub-text here is that measures upon which ownership limits would be based (such as consumption or revenue metrics) cannot take account of contextual factors which can determine a media group’s ‘share of voice’ and may not be detectable through quantitative indicators of market share. What’s more, the argument goes, media markets are particularly dynamic and subject to rapid change which a static system of ownership limits would be ill-equipped to respond to.

These arguments fail to address the nuances of proposals for ownership limits, many of which stipulate lower and upper thresholds triggering a range of remedies according to specific circumstances and market conditions. My examination of six non-industry proposals[1] submitted to the Lords Select Committee on Communications inquiry into the issue found the following to be the most common:

The concept of ‘absolute limits’ is often assumed to denote a market share threshold at which companies would be forced to either divest or close down. But in fact, we can look at absolute or ‘ceiling’ limits in two distinct ways: an outright prohibition on any group or company that breaches the limit, or a prohibition on any controlling interest within a company that breaches the limit (Ofcom has already provided detailed guidance on how to determine a controlling interest in media companies).

If the latter framework is accepted for remedies in appropriate circumstances (i.e. where straightforward divestment would threaten the viability of a given title as a going concern), there is little basis on which to assert that fixed limits will act as deterrents to innovation of growth. And provided that any system of fixed limits is subject to regular periodic review, there is no reason why ‘clear bright lines’ in plurality policy cannot offer both flexibility and certainty so desired by the industry and Ofcom.

Should we have more or less discretionary power?

The issue does not come down to a binary choice between clear bright lines or discretionary power. The question is a relative one: should we have more or less discretionary power? In the UK, the plurality regime since 2003 has allowed for considerably more ministerial discretion compared to that in other western democracies – including France, Germany, Italy and the US – where fixed limits are more significant. But even here, there remains the ‘twenty twenty’ rule that puts limits on joint ownership of channel 3 licenses and national newspapers.

In its supplementary advice to the Secretary of State last year, Ofcom cautiously recommended “indicative ranges and thresholds” to provide more detailed guidance for decisions on when, where and how to intervene on behalf of plurality. Proposed systems for ownership limits merely take this approach one step further – by enshrining such guidance in law – so that there is less room for doubt or manoeuvre in response to industry lobbying.

The potential impact of thresholds and limits

My examination of who would be affected in the current market by the kind of ownership limits described above based on measurement data commonly accepted in the industry indicates that their impact would be negligible in most sectors – even at the lower levels of limits proposed – provided that the BBC is included in measurement and the broadcasting code is factored into plurality assessments (such that additional remedies may be considered superfluous). The two media groups that would be subject to some kind of intervention under existing market conditions and according to proposed limits would be News UK Ltd and the Daily Mail & General Trust, even applying them only the newspaper sector as shown below: 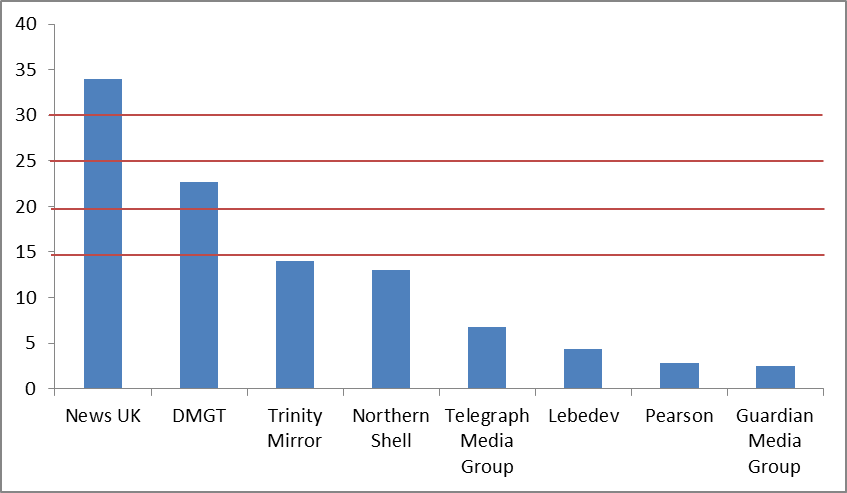 So if ownership limits end up having only a moderate impact on the market, would they yield much benefit for plurality at all? Clearly, divestment or dispersal of shareholdings in one or two national newspaper titles in not going to fundamentally alter the dynamics of media power. But although it is not just Murdoch and Rothermere who have the ear of policymakers, they do have a level of access that is consistent with the penetration of their titles. It is Murdoch who was effectively given the keys to the back door of Number 10, and it is Rothermere who got to spend a private weekend with the Prime Minister at Chequers last year, at the apex of intensity in media reform debate.

What’s more, Leveson testimonies show that it is the perception of media power on the part of policymakers that can lead to their capture, irrespective of the media’s actual influence over voters. There are few measures that could make a surer start in eroding such perceptions than a system of fixed limits. Such a system will ensure that decisions about one of the most fundamental aspects of media policy are intrinsically, rather than theoretically transparent.

This blog gives the views of the author, and does not represent the position of the LSE Media Policy Project blog, nor of the London School of Economics. A full report of Justin Schlosberg’s findings can be found in his brief Modelling Media Ownership Limits, published as part of our policy brief series.

[1] The groups selected were those responding to the inquiry that a) do not represent commercial interests, b) explicitly reference ownership limits in some context, and c) are not single issue campaigns (e.g. European Initiative on Media Pluralism).

Notes: Data based on figures produced by ABC for average daily circulation between March and August 2013 inclusive. A combined circulation of Daily and Sunday titles has been derived by multiplying the Daily averages by six and then adding to the Sunday average. Shares are then calculated based on the total circulation of the titles measured and attributed to publishers, all of whom own individual titles outright. Daily Record and Sunday Mail excluded as they are included as regional titles in figure 2.

Justin Schlosberg is a media activist, researcher and lecturer at Birkbeck, University of London, and author of Power Beyond Scrutiny: Media, Justice and Accountability.

Originally published by LSE Media Policy Project. Republished with permission and thanks.