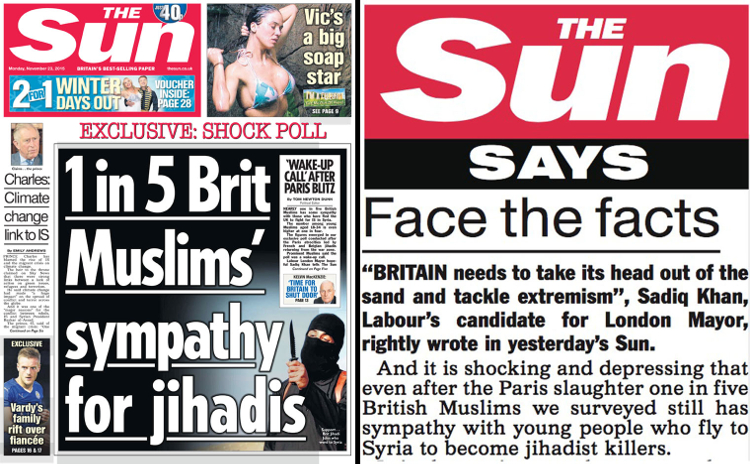 If you want to see why dishonest editors are so attached to their sham regulator, IPSO, and why this is extremely bad for Britain, you could hardly have a better illustration than the case of the Sun’s reckless front-page treatment of a poll this week.

At a time of heightened anxiety about terror attacks – a time when, all evidence shows, gratuitous violence against Muslims is likely to increase — the Sun saw fit to lead its front page with a headline announcing that one in five British Muslims sympathise with jihadis.

As has been pointed out here and here, this is at best a gross distortion of the poll findings, and at worst a plain lie. The Survation poll upon which the Sun claimed to base its headline did not show any such thing. Survation itself drew almost the opposite conclusions.

Clause 1, paragraph 1 of the Editors’ Code of Practice, to which the Sun is a signatory and which IPSO is meant to uphold, states baldly: ‘The Press must take care not to publish inaccurate, misleading or distorted information . . .’

Since that front page is clearly inaccurate, misleading and distorted, it is clear that the Sun has breached the code, and not merely in some technical fashion but in a manner that actually has the potential to encourage violence against British Muslims. This is a grave matter.

The Sun followed up the distorted front page with a leader column the next day which made reference to the criticism, declared its original story factually correct and promptly set out a brand new distortion of the opinion poll.

The Sun claims it is subject to regulation by IPSO, and in any normal regulated field of human activity we might expect the regulator to take urgent, vigorous and public steps to ensure that so gross a misrepresentation is very prominently corrected. Indeed this is surely a case where a swift correction on the front page is in order.

More than that, we would expect the regulator to investigate how the paper came to get such an important story so grotesquely wrong. Was this a case of thoughtless and gung-ho editing? Or was it as case of careless reporting, perhaps by a journalist with no command of numbers? How did sub-editors let it pass? A proper regulator would find out and make sure that the fault was addressed so that such a mistake was less likely to happen again.

And if the regulator found that the front page headline was a wilful act, or that the paper did not respond satisfactorily to the regulator’s findings, or that the offence was repeated, there should probably be a fine, and in the case of a wealthy paper such as the Sun, a hefty one.

IPSO will do none of these things. Not one. So far as IPSO is concerned, the Sun can recklessly endanger the lives of British Muslims with dishonest headlines just as much as it likes. This is because IPSO is a poodle and not a watchdog.

Despite calling itself a regulator it may never even consider the matter, since its rules allow it to ignore many kinds of well-founded complaints. If it actually adjudicates on the case it will allow the Sun the benefit of whatever doubt can conceivably be contrived. And in the extremely unlikely event that the Sun is found by IPSO to have breached the code, the worst that will happen will be a slap on the wrist, several months hence and a correction buried on an inside page.

(Indeed when, miraculously, the Sun received such a slap a few months ago, and was ordered to print an adverse adjudication, it deliberately ignored a requirement to put a headline on it and IPSO did nothing.)

IPSO is, by design, a sham regulator, designed to protect the interests of powerful newspaper companies rather than the interests of the public. When a big national paper wants to do something disgraceful, as the Sun did this week, the thought that it might get in trouble with IPSO does not even enter the editor’s head.

This article was originally published by Hacked Off