The arrest of Julian Assange and extradition charges brought against him set a grave precedent for press freedom. Both the US and UK governments have once again demonstrated contempt and cynicism for some of the basic principles of watchdog reporting in the public interest. Whatever the legal and political manoeuvrings at play in an attempt to disguise this brazen attack on … END_OF_DOCUMENT_TOKEN_TO_BE_REPLACED

By Angela Phillips For the first time since the start of the hacking enquiries, the British Press is speaking with one voice in its condemnation of the police use of special powers to investigate journalists’ phone records.  That the two cases— the prosecution of Chris Huhne and the investigation into Andrew Mitchell’s altercation with police at Downing Street—both involve … END_OF_DOCUMENT_TOKEN_TO_BE_REPLACED 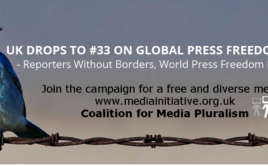 by Amy O’Donoghue Following government harassment of journalists and editors, the UK has fallen from number 29 to 33 on Reporters Without Borders’ annual World Press Freedom Index. Yesterday, Reporters Without Borders (RWB) identified a decline in press freedom in the UK, due to the government’s response to publication by the Guardian newspaper of the intelligence files … END_OF_DOCUMENT_TOKEN_TO_BE_REPLACED 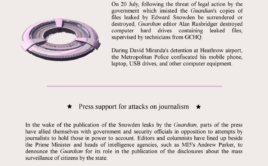 Recent debates on press ethics and behaviour have focused on the reporting of the mass surveillance programmes of the US National Security Agency and British intelligence agency, GCHQ; and the all-party Royal Charter on press regulation, and its rejection by parts of the press. In light of these developments, our guide outlines the difference between what is and what is not … END_OF_DOCUMENT_TOKEN_TO_BE_REPLACED

MEDIA REFORM COALITION RESPONDS TO PM'S THREATS TO GUARDIAN As five senior journalists stand in the dock of the Old Bailey and David Cameron hints at the possibility that the government might take action against the Guardian over the Snowden leaks, we are presented in the most graphic possible terms with the reason why we need an organisation with clear ethical oversight of … END_OF_DOCUMENT_TOKEN_TO_BE_REPLACED

By Justin Schlosberg Last week, MP’s announced plans to formally inquire into the Guardian’s coverage of the Edward Snowden leaks, prompted by a letter from former Defence Secretary Liam Fox. The letter accuses the Guardian of double standards in its coverage of the leaks, given its role in exposing the phone hacking scandal, and reiterates claims that the leaks have damaged … END_OF_DOCUMENT_TOKEN_TO_BE_REPLACED

By Justin Schlosberg This article originally appeared at the Huffington Post and is reposted here with their kind permission. The sentencing of Chelsea Manning to 35 years imprisonment for leaking comes off the back of a series of legal and extra-legal attacks against those who speak truth to power. In his reflections on the latest scandal to involve the NSA whistleblower … END_OF_DOCUMENT_TOKEN_TO_BE_REPLACED