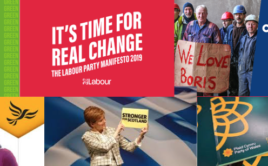 by Natalie Fenton The media have been central actors in this General Election campaign. Research by Loughborough University has shown the dominance of pro-Conservative party and anti-Labour Party coverage in the national press and others have claimed forcefully that the BBC has failed in its duty of impartial reporting. Cries of misrepresentation, under-representation, … END_OF_DOCUMENT_TOKEN_TO_BE_REPLACED