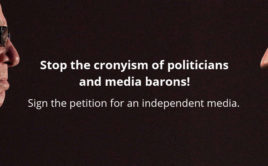 by Justin Schlosberg This week we learned lessons in crisis management given by Tony Blair to former News of the World editor Rebekka Brooks, at the height of the phone hacking scandal. Accordingto Brooks, the former Prime Minister advised her to set up an independent inquiry that produces a ‘Hutton style report’. This reference to the widely-discredited whitewash … END_OF_DOCUMENT_TOKEN_TO_BE_REPLACED

By Martin Hickman Tony Blair was privately advising Rupert Murdoch’s newspapers on the phone hacking scandal days after learning its best-selling Sunday title, the News of the World, had intercepted the messages of a missing girl, the Old Bailey heard today. As the allegations swirled round News International in July 2011, Mr Blair, the former Prime Minister, suggested … END_OF_DOCUMENT_TOKEN_TO_BE_REPLACED

This post was originally written by Joe Sandler Clarke at the Huffington Post, and is reprinted with their kind permission. Two more Sun journalists were charged by police last month. Jamie Pyatt, a reporter, and John Edwards, the tabloid's pictures editor, were charged with allegedly making payments in excess of £30,000 to public officials. They face trial on July … END_OF_DOCUMENT_TOKEN_TO_BE_REPLACED