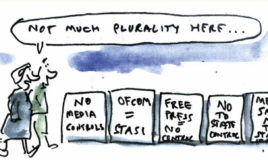 The Media Reform Coalition, together with the Campaign for Press and Broadcasting  Freedom, have just published their 'Manifesto for Media Reform' ahead of May's General Election. Launched at a meeting in Parliament on 18 March with MPs, trade unionists and campaigners, the manifesto aims to put a range of issues - from media ownership to public service broadcasting and from … END_OF_DOCUMENT_TOKEN_TO_BE_REPLACED